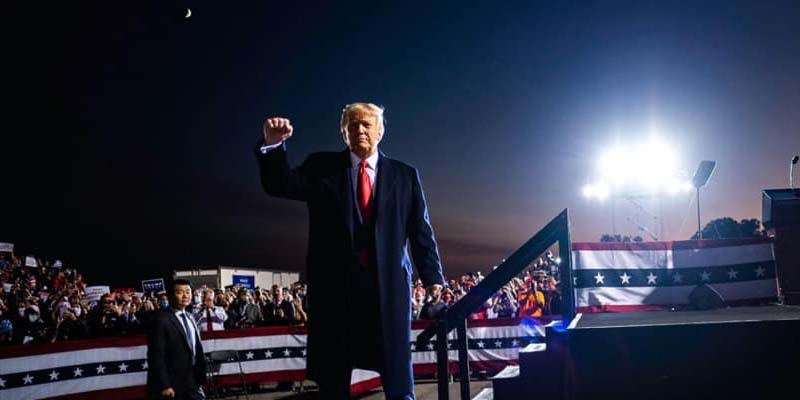 45Office.com – When Twitter and Facebook tried to silence former President Donald J. Trump while he was still in office, the left celebrated. They celebrated the destruction of free speech and it created an avalanche of chain reactions.

Donald Trump is a major news figure but many media outlets and platforms have conspired to censor him and to censor certain information about him for political reasons. We will publish some of that difficult-to-find information here.

Rumble fell. Conservative media was backed up against the wall. Even Shore News suffered from squelching on Facebook, Twitter, and other platforms. Anyone who did not agree with the mainstream leftist narrative was punished once they dethroned the only man who could…and would have stopped them.

Last month, Trump announced his new venture, 45office.com. [Here’s a link] It has since sat with the former President’s newly created seal.

Today, 45office.com went live. The page now includes a Trump biography, images of the President and First Family during his time in office, and forms to allow the media and the people to connect directly with the President and his staff.

45office.com has been a success even before it launched. Through email, the President has been keeping in touch with his campaign supporters and in the press, we get briefs from Trump almost daily. Those communications are like getting a letter from an old friend who has been in jail.

Now, the President has moved into phase two of his next plan…and he’s still keeping that close to the chest.

He has proven that no, you don’t need Twitter and you don’t need Facebook to survive in the digital age. In fact, Trump says he’s ok without either platform because 45office has worked.

The reporters who are non-biased are reporting on his actions while the liberal media, desperate to survive hang on every 45office.com email to feed the deranged masses that follow them blindly. Without Trump, CNN and MSNBC have no content. They ignore the problems of the Biden administration and continue to manipulate their readers to cover the news the way they see it through their skewed liberal lenses that only focus on the left.

45office.com in the news

You can visit 45office.com or check back here at Shore News Network as we’ll provide coverage of Trump and 45office as it comes, unfiltered and uncensored. You can come back here for the latest 45 office News.