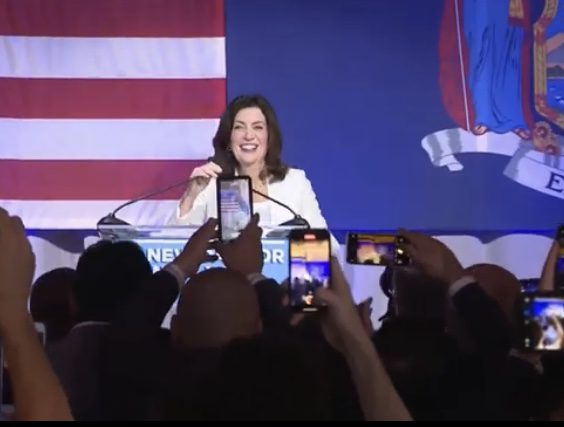 “Over the course of the last few days, we’ve received an outpouring of calls from voters who are absolutely outraged over a mailing they received. New York state Democrats sent out and paid for a mailer that was made to look like it was an official document for New York State and it was called the ‘New York State Voter Assistance Program’ from VoteNY,” claims Langworthy.

Langwothy claims this mailing had COVID-19 already checked as the reason for requesting an absentee ballot.

“This mailing is designed to deceive voters,” says Langworthy.

“And it’s outright dishonest by pre-checking their reason for needing an absentee ballot. No one should fill out that box but the voter who’s requesting it. And in fact, the ballot application reads, ‘I am requesting in good faith, an absentee ballot due to’ and then the voter selects the reason. This is possibly fraudulent, but at the very least it’s a shady dirty trick that takes advantage of voters and it leads them to possibly lying on this application and an official document.”

According to Langworthy, this directly neglects the wishes of voters who rejected a Constitutional Amendment to allow no-fault absentee ballots last year. Due to the close race the election has become, he believes Democrats are using COVID as an excuse to “rig the election.”

“Two recent polls show Lee Zeldin within four and six points of beating Kathy Hochul. Now their attempt to put the thumb on the scale with gerrymandering was struck down by the courts, and they are poised to lose seats in Congress, the Senate, and the State Assembly. That’s why they’re trying to weaponize absentee voting with deceitful tactics,” says Langworthy.

The candidate claims absentee voting opens the door to voter fraud, ballot harvesting, and voter coercion. Early voting, according to the chairman, should almost completely eliminate the need for mail-in votes.

The State Democratic Party released the following statement in response:

“Nick Langworthy and Lee Zeldin should take a hard look in the mirror given their shared record of spreading misinformation and conspiracy theories to overturn the 2020 presidential election, as well as the Zeldin campaign’s own ongoing scandal surrounding fraudulently submitted photocopied petition signatures,” state Democratic Party spokesman James Martin said in a statement.