BREAKING: Joe Biden Hurt While Playing With His Dog 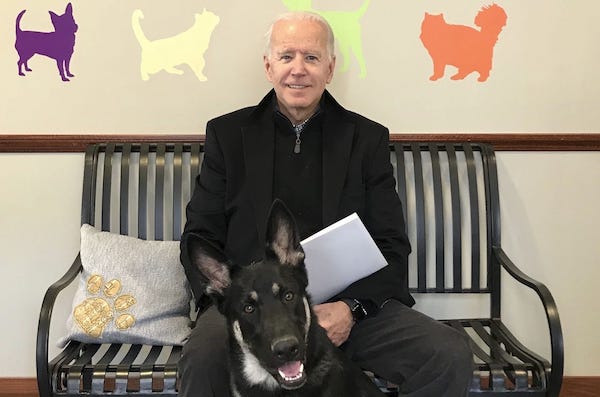 Former Vice President Joe Biden reportedly suffered an injury Sunday and will be seeing an orthopedist soon. According to a pool report, he twisted his ankle when playing with his dog Major, a German shepherd.

During the election, the Biden campaign was at great pains to emphasize his physical fitness, to counter perceptions that he would be too old for the job at 77 years old (78 today). For example, they showed him riding his bicycle — to the delight of the media — even though he rarely left his home in Wilmington, Delaware, to campaign.

After the election, the media provided glowing coverage of Biden’s dog, which would reportedly be the first “rescue” dog in the White House.

As Breitbart News’ Kyle Morris reported on Sunday, Biden also has another German shepherd, Champ. The two dogs and a cat will also join Biden in the White House, should he take the oath of office:

“Champ and Major, who have been featured frequently in Biden campaign advertisements and promotions, will be the first dogs to reside at the White House since Barack Obama’s Portuguese water dogs, Bo and Sunny,” Morris noted.

There is no word yet on Biden’s condition, though reporters were told on background that his condition does not seem to be serious, and he is only being examined out of an abundance of caution.