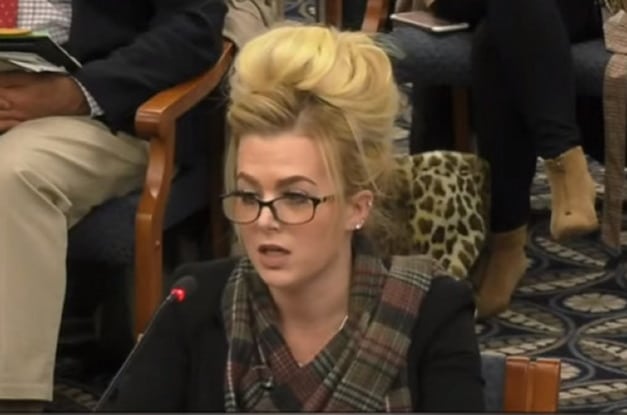 Dominion Voter Systems IT Contractor Melissa Carone testifies before Michigan State Senate Committee on Oversight regarding absentee ballot counting at the TCF Center in Detroit. She leaves absolutely NOTHING on the table.

Democrats and the media keep saying there’s no evidence of voter fraud in the 2020 election, yet people who were on the ground on election day keep coming forward and saying otherwise.

In Michigan, during a hearing held this week, a contract IT worker for Dominion named Melissa Carone provided stunning testimony about alleged voter fraud by poll workers.

The media has largely ignored this for reasons which should be obvious.

Melissa Carone, a contractor who worked with Dominion Voting System at Detroit’s TCF Center, testified at a Senate Committee hearing on Tuesday.

She says that she saw fraud all throughout her time there on the 3rd and 4th of November.

Former TCF Center Worker Melissa Carone said: “What I witnessed at the TCF Center was complete fraud. The whole 27 hours I was there, there were batches of ballots being ran through the tabulating machines numerous times, being counted 8 to 10 times. I watched this with my own eyes; I was there to assist with IT. ”

Carone says the proper way to scan ballots when there’s a paper jam is to reset the count, in other words, discard the count, on the machine and rescan all of them with the jammed paper on top.

But, apparently, that didn’t happen and counters rescanned ballots without resetting the count.

She went on to say that there were people on the night shift who were completely untrained. One of which was a friend of hers that she’s known for over 20 years.

Watch her testimony below, this will blow your mind:

Melissa Carone said: “They were allowed to do whatever they wanted to do. I, Nick, and Samuel, that worked for Dominion, they were on the stage. They had a contract employee, me, and another one that was from Texas—I have his name right here, Miles Smiley, 90-year-old man, there to assist with IT work. And he did not have any kind of background in IT and lived in Tennessee. So this man was just walking around aimlessly. I was really the only one running around like crazy helping these people.”

In an interview with The Epoch Times, Carone says that Dominion hasn’t contacted her since she submitted her affidavit.

Here, you can take a look at how people reacted on Twitter:

The witness testifying now in the Michigan election hearings is all you need to know to realize we did not have a real election.

At the hearing yesterday in Michigan, a dominion IT contractor Melissa Carone, dropped truth bombs & blew the whistle on dominion workers. She said they re-scanned ballots 8-10 times. Drops at 4:a.m. Are we witnessing a full-blown meltdown of our system of governance??

Let’s face it. This election stinks. We need a re-do where all of Donald Trump’s votes get counted! Join the Magadon.net community and leave a comment, story, photo, video, create groups with their own blog and much more!