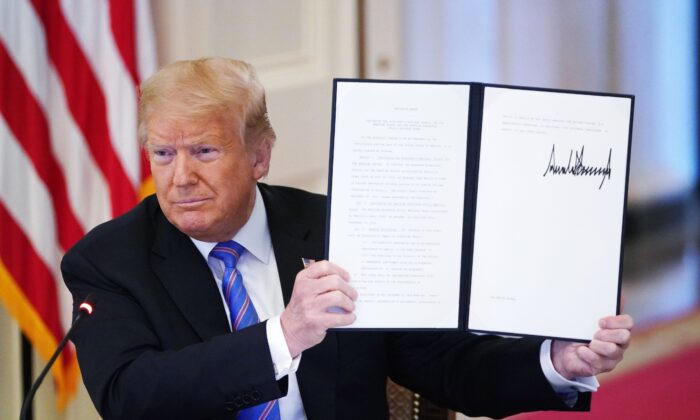 Former President Donald Trump said that he is not aiming to make the Republican Party his party, seemingly responding to criticism from certain House GOP lawmakers in recent days.

“I’m not looking to have it be the party of Trump,” Trump said on WABC New York on Thursday, adding that he wants the GOP to adopt policies that were part of his “Make America Great Again” movement. “I’m looking to have a great country.”

“I’m looking to have a country that is run by people that know what they’re doing, and we had it going” before the Nov. 3 election, Trump said.

In several recent interviews and statements, the former president has said that he is planning on helping Republicans take back the House and Senate in 2022. Then he will make a decision or an announcement on whether he will run for president in 2024.

Trump on Thursday did not say whether he would run for president. He said that Americans should “stay tuned” for more announcements.

Also in the WABC interview, the former commander-in-chief decried the Biden administration’s policies and messaging, saying that the crisis along the U.S.-Mexico border needs to be dealt with.

Donald J Trump Is Telling People That He Will Be Reinstated As President: Report

Jun 7, 2021
We use cookies on our website to give you the most relevant experience by remembering your preferences and repeat visits. By clicking “Accept”, you consent to the use of ALL the cookies.
Do not sell my personal information.
Cookie settingsACCEPT
Manage consent