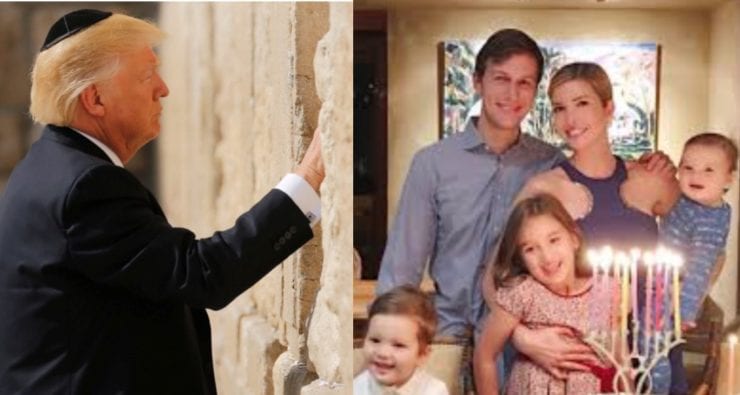 On November 8, 2016, America elected the first President of the United States with a Jewish child. Ivanka Trump converted to Judaism in 2005, four years before she married her Orthodox Jew husband of ten years, Jared Kushner. Former White House Advisor Jared Kushner, whose hard work was ignored by the dishonest mainstream media, has been credited with historic peace deals between Israel and the United Arab Emirates and Bahrain.

During his four years in office, President Donald J. Trump never made a secret of his commitment to defending Israel or his support for the former Prime Minister Benjamin Netanyahu.

On December 6, 2018, President Donald Trump announced that America formally recognizes Jerusalem as Israel’s capital city, changing decades of U.S. policy in a brief afternoon speech and casting the move as a bid to preserve, not derail, aspirations for regional peace.

The critics of Donald Trump attacked his decision, but for decades, some of the party’s most beloved Democrats used the promise of recognizing Jerusalem as the capital of Israel as a way to get votes:

Democratic Senator Dianne Feinstein of California blasted President Trump for his bold decision to move the U.S. embassy in Israel from Tel Aviv to Jerusalem. Feinstein claimed it would be a “terrible decision” even though she previously voted for the embassy to be moved.

In 1995, Diane Feinstein defended the move of the US embassy to Israel. Feinstein gave a passionate plea on the Senate floor:  “Let me state what I believe are some basic truths. The first basic truth is that the United States of America has an absolute right to place its embassy in a capital city, any capital city. Clearly, Jerusalem is the capital of Israel.”

In 1999, while campaigning for New York’s US Senate seat, first lady Hillary Rodham Clinton said in a letter, that she considered Jerusalem to be the “eternal and indivisible capital of Israel” and will be an active advocate — if elected to New York’s Senate seat — to move the U.S. embassy to Jerusalem.

Hillary’s not the only one to promise, that if elected, they would move heaven and earth to make Jerusalem the rightful capital of Israel. As it turns out, Bill Clinton, George W. Bush and Barack Obama (twice) also made the same promise. The only problem is, none of them had the courage to do it.

President Trump, however, ignored his critics and pressed on, determined to follow through on his campaign promise to move the US Embassy to Israel fro Tel Aviv.

Jewish Democrats sent a strong message about their support for Israel when they snubbed the the trip to Israel to show their support for the opening of the US Embassy in Jerusalem. Four Republican Senators Ted Cruz (TX), Dean Heller (NV), Lindsey Graham (SC), and Mike Lee (UT), along with Independent Senator Joe Lieberman (CT), and ten Republican U.S. Representatives made the trip to Israel.

On Monday, in a new season of Axios’ “How It Happened” podcast, reporter Barak Ravid of Tel Aviv interviews President Trump about his past and current relationship with former Israeli Prime Minister Benjamin Netanyahu.

From the Axios article – Donald Trump and Benjamin Netanyahu were the closest of political allies during the four years they overlapped in office, at least in public. Not anymore. “I haven’t spoken to him since,” Trump said of the former Israeli prime minister. “F**k him.”
What he’s saying: Trump repeatedly criticized Netanyahu during two interviews for my book, “Trump’s Peace: The Abraham Accords and the Reshaping of the Middle East.” The final straw for Trump was when Netanyahu congratulated President-elect Biden for his election victory while Trump was still disputing the result.

“The first person that congratulated [Biden] was Bibi Netanyahu, the man that I did more for than any other person I dealt with. … Bibi could have stayed quiet. He has made a terrible mistake.”

Why it matters: Now opposition leader Netanyahu is waging a continuous campaign to win back the Prime Minister’s Office while on trial for corruption.

One of his primary political calling cards is his close relationship with key players in U.S. politics, and with one man in particular who remains hugely popular in Israel: Trump.
The big picture: For domestic political reasons, both Trump and Netanyahu cultivated the public perception that there was no daylight between them as they worked closely together on key issues. But by the end of his presidency, Trump had concluded that Netanyahu didn’t really want peace with the Palestinians and was using him on Iran.

Trump also felt he’d helped ensure Netanyahu’s political survival, but didn’t get the same in return. He positively fumed about the video in which Netanyahu congratulated Biden.

But Trump claimed he was shocked when his wife Melania shared Netanyahu’s video with him: “He was very early — like, earlier than most. I haven’t spoken to him since. F**k him.”

One thought on ““F*** him” Donald Trump Blasts Netanyahu For Being “first” To Congratulate Biden: “I think it hurt him very badly…I haven’t spoken to him since.””