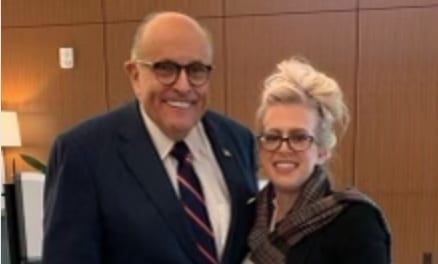 Dominion whistleblower Mellissa Carone has announced her intention to run for State Rep in Michigan’s 46th District. Carone hopes to replace conservative MI State Rep. John Reilly, who defeated his Democrat opponent in 2020 with 62% of the vote. Reilly is a popular conservative who is unable to run for office again because of term limitations.

Carone told us that if she is elected in 2022, her number one priority will be election integrity. The fearless whistleblower who’s been threatened with a lawsuit by Dominion Voting Systems says her goal will be to make sure Dominion voting machines are removed from all polling locations in Michigan. She believes voters need to go back to hand-counted paper ballots. Mellissa would also like to see mail-in-voting eliminated. Carone told us that she believes “I believe elections in Michigan have been unfair for a while,” and that she believes “voter ID needs to be enforced for all voters in Michigan.”

The brave, female conservative candidate believes Governor Whitmer is behaving like a communist with her strict lockdowns. “We need to get our state open and our economy going,” she told us. “We also need to get people off unemployment and working again,” Carone said.

When it comes to Michigan schools, Carone is passionate about “bringing God back” and “making sure our kids are saying the Pledge of Allegiance in school.”

When we asked Carone about the status of her lawsuit with Dominion, she told us that she hasn’t heard from them since she received a letter from their attorneys.

The Trump-supporting Republican says that she plans to be getting some huge endorsements from well-known conservatives soon. Instead of running away from the media that tried to destroy her, Carone runs toward them—full-steam ahead. When we asked her about the attacks she’s sure to receive from the Democrat Party media, Carone responded by saying that when you’re running for office, there’s nothing wrong with getting a lot of media coverage, adding that she really doesn’t care about the attacks by the leftist media.

Something tells that if Mellissa Carone wins a seat in the Michigan State legislature, she will be a force to be reckoned with.