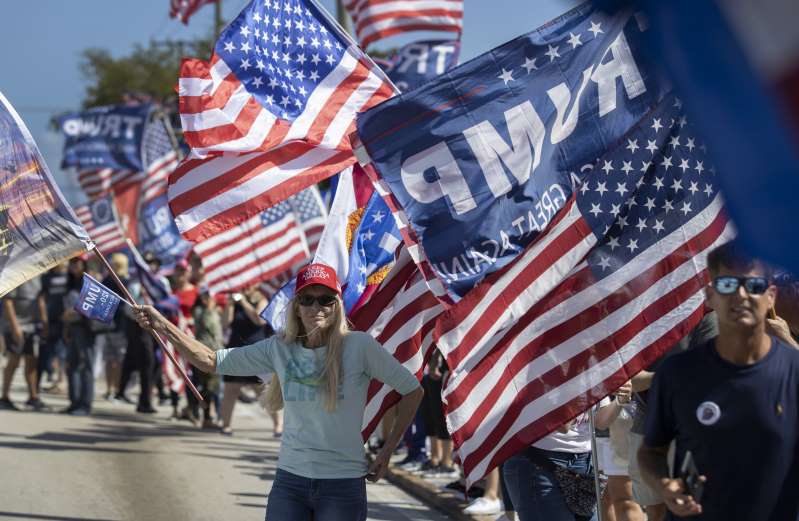 Viewer trust in Fox News has plummeted among supporters of former President Donald Trump since he lost the 2020 election to President Joe Biden, according to a new poll.

In the latest USA Today/Suffolk Poll, released Sunday, just 34 percent of Trump voters listed the Fox News as their “most trusted source of news”—a 24 percent drop from the 58 percent that favored the network in October 2016.

Two news outlets have increased in prominence among conservatives in recent months. Newsmax is now seen as the most trusted source of news among 17 percent of Trump supporters and One American News Network (OAN) among 9 percent.

David Paleologos, director of the Suffolk University Political Research Center said the findings indicated a “seismic shift in the landscape of trusted news sources for conservatives.”

The GOP has devolved into a virtual civil war between the Trump wing and the establishment wing impatient to quell his influence on the party.

According to the poll, 46 percent of Trump voters say they would leave the GOP to join the former president’s new movement if he creates one, while just 27 percent would remain. The rest said they are undecided.

“We feel like Republicans don’t fight enough for us, and we all see Donald Trump fighting for us as hard as he can, every single day,” small business owner Brandon Keidl, 27, of Milwaukee told pollsters. “But then you have establishment Republicans who just agree with establishment Democrats and everything, and they don’t ever push back.”

The poll data included responses from 1,000 Trump voters and was taken by phone between February 15-19. It has a margin of error of plus or minus 3.1 percentage points.

Despite leaving the White House last month, the former president said after the conclusion of his second impeachment trial that he will still play a role in politics.

“Our historic, patriotic and beautiful movement to Make America Great Again has only just begun,” he said in a statement following his Senate acquittal.

“In the months ahead I have much to share with you, and I look forward to continuing our incredible journey together to achieve American greatness for all of our people.”

The loyalty that Trump has retained among GOP voters will allow him to have influence over the upcoming 2022 election. Last Saturday, Senate Minority Leader Mitch McConnell acknowledged that he could be on a collision course with the former president on his path to regain a majority in the upper chamber.

“My goal is, in every way possible, to have nominees representing the Republican Party who can win in November,” McConnell told Politico. “Some of them may be people the former president likes. Some of them may not be. The only thing I care about is electability.”

Trump released a fiery statement attacking McConnell on Tuesday. “Mitch is a dour, sullen, and unsmiling political hack, and if Republican Senators are going to stay with him, they will not win again,” he wrote. “Where necessary and appropriate, I will back primary rivals who espouse Making America Great Again and our policy of America First.”

3 thoughts on “Fox News Plummets Among Trump Voters as ‘Most Trusted Source of News’: Poll”