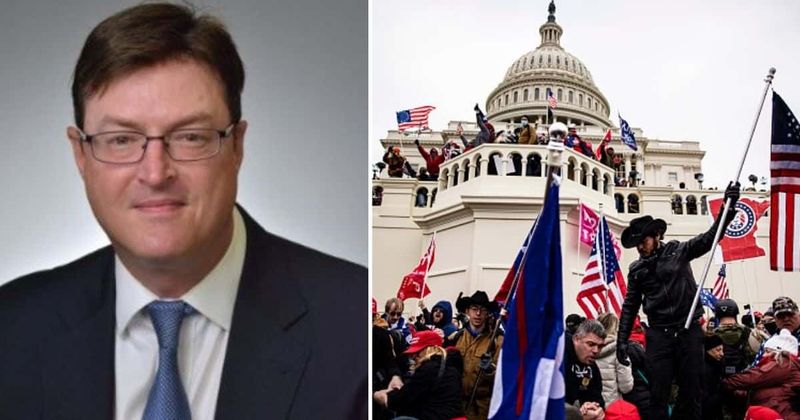 53-year-old Christopher Stanton Georgia committed suicide on Saturday after he was charged in the Capitol riot according to the Fulton County medical examiner.

According to WXIA, the police report shows Georgia’s death is “under investigation.

Four men with Georgia ties have been arrested for making threats or taking part in last week’s riot at the US Capitol.

11Alive has learned that one of them, Christopher Stanton Georgia, has since died. The Fulton County Medical Examiner said his cause of death is suicide. They said he had a gunshot wound to the chest.

An Alpharetta Police report shows Georgia died at his home on Saturday.

The report shows officers removed two rifles from his home and listed his death as “under investigation.”

Who was Christopher Stanton Georgia? Capitol rioter’s wife says ‘there’s blood everywhere’ after he kills himself

Georgia was a ‘loving father’

According to his LinkedIn profile, Georgia worked as a regional portfolio manager at BB&T. It is a North-Carolina based banking company that later became known as Truist Financial after a merger with SunTrust in 2019. In the early 1990s, Georgia reportedly earned his livelihood by selling hairpieces, before he secured a stable career in finance. Among his neighbors, he was known as an amicable, happy man who never spoke badly about anyone. Jace Carreras, a neighbor of Georgia, told The Sun that Georgia was a ‘loving father’ and someone “who always had a smile and loved cutting his own grass.”

Georgia’s former mother-in-law from his previous marriage, Ellen Burbage, however, considered him a ‘bad influence’ on her daughter Lisa. She considered their divorce a welcome decision. But even Burbage agreed that Georgia never came off as someone who took such a keen interest in politics.

Why was Georgia arrested?

On January 6, 2021, during the Capitol riots, authorities declared a 6 pm curfew to handle the mob attacks. Georgia, along with a group of pro-Trump troublemakers, reportedly violated the curfew order around 7.15 pm. Despite several warnings by police officials, the mob refused to disperse, prompting the police to arrest the rioters. As per the documents released by the Superior Court of DC, Georgia was charged with trying to “enter certain property, that is, the United States Capitol Grounds, against the will of the United States Capitol Police.”

Arrest on the grounds of unlawful entry carries a penalty of up to 180 days in jail and fines up to $1,000. So far, 82 people have been arrested on this ground for the shocking attack on the US Capitol last Wednesday, during a Congress session to validate Joe Biden’s electoral victory.

DailyMail reported that on the morning of January 9, Georgia’s wife called 911, and frantically reported that there was “blood everywhere.” She had discovered his body in their basement and provided details about his death to the police. Later, the police recovered two semi-automatic SKS rifles from his home. The police report from the scene described Georgia’s family members to be ‘extremely distressed’ by the situation. However, the police have not divulged any further details about Georgia’s death and the incident was placed under investigation.

Georgia happens to be the sixth person reported dead as a consequence of the US Capitol attack. Before him, four Trump supporters and one police officer were confirmed dead at the site of the riot.