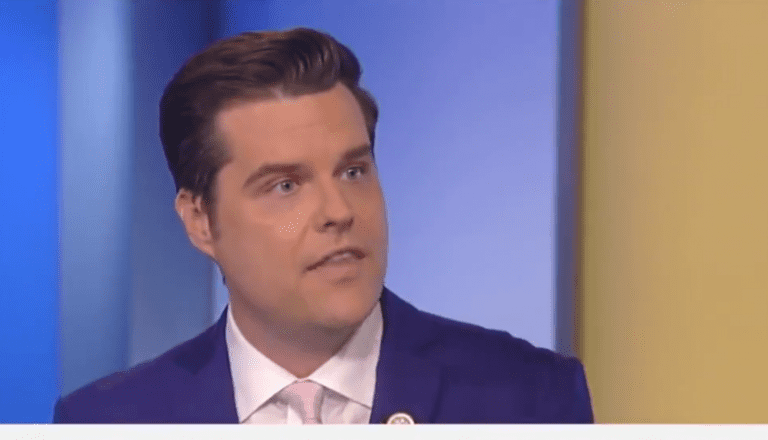 Florida Rep. Matt Gaetz (R) caught the attention of Democrats by suggesting that Republicans in both the House of Representatives and Senate debate about states where voting irregularities exist.

Gaetz said the debate rests on whether or not Congress should accept the contested states’ electors.

I talked today to Republicans in both the House of Representatives and the Senate.

There's an interest in examining voting irregularities and forcing a debate in Congress about whether or not to accept states' electors where those irregularities exist.

Nothing is off the table.

In an interview with Lou Dobbs, Gaetz rightfully called out the RINOs not willing to fight for a free and fair election:

Time to Stand and Fight: @mattgaetz slams RINO colleagues for ignoring voter irregularities, and offers his support for @realDonaldTrump's fight for a free and fair election. #MAGA #AmericaFirst #Dobbs pic.twitter.com/nR15uo9fQD

At least some members of Congress are fighting to preserve election integrity in America.

But Democrats weren’t too happy with Gaetz’s remarks:

I talked today to Republicans in both the House of Representatives and the Senate.

There's an interest in examining voting irregularities and forcing a debate in Congress about whether or not to accept states' electors where those irregularities exist.

Nothing is off the table.

The left-wing media also had a meltdown to Gaetz’s comments:

President Donald Trump’s arsenal for overturning the election will soon be down to one final, desperate maneuver: pressing his Republican allies on Capitol Hill to step in and derail Joe Biden’s presidency.

Although the Electoral College casts the official vote for president on Dec. 14, it’s up to Congress to certify the results a few weeks later. And federal law gives individual members of the House and Senate the power to challenge the results from the floor — a rarely used mechanism meant to be the last of all last resorts to safeguard an election.

Politico also discussed the implications of a potential Congressional debate in January:

The framers declared that the presidential election isn’t official until lawmakers certify the winner. The voters, on Nov. 3, picked 306 electors for Biden and 232 for Trump. Those electors will cast their formal votes for president on Dec. 14.

An obscure 1887 law called the Electoral Count Act, and several subsequent updates, spell out the process, setting Jan. 6 after a presidential election as the official certification date and outlining vague, complicated procedures.
That same federal law also gives a tiny number of lawmakers enormous power to challenge the results.

If a single House member and a single senator join forces, they can object to entire slates of presidential electors. They must do so in writing and provide an explanation, though there are no guidelines on how detailed it must be.

If they do, the House and Senate must retreat to their chambers and debate the outcome for up to two hours before voting on the matter. Each state’s electors are certified separately, meaning lawmakers bent on challenging the results have multiple chances to force lengthy delays.

If the Democrat-run House and GOP-controlled Senate disagree? That outcome has never been tested before, though it would likely give governors in key states — including the Democrats who lead Pennsylvania, Wisconsin and Michigan — a larger role.

A few House Democrats have previously tried and failed to challenge GOP presidencies in 2001 and 2017 — after Al Gore and Hillary Clinton won the national popular vote but lost the Electoral College to George W. Bush and Trump, respectively.

And congressional Democrats went even further in 2005, when John Kerry lost to Bush, forcing a full-fledged debate on Ohio’s electoral votes before both the House and Senate voted to reject the challenge.