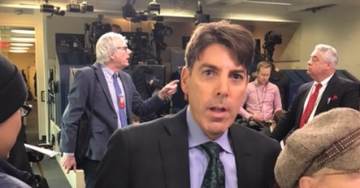 In January 2017 the Gateway Pundit announced we would be represented in the Trump White House with a reporter at the daily briefings.

The liberals did not take the news well and our reporter Lucian Wintrich was attacked nearly every day he set his foot into the press room. Lucian was even accosted and harassed at one point by the vicious reporter-activists in the room.

It was clear during the Trump years that the media’s goal was to smear President Trump and ignore his successes. They were threatened by any real news outlet.  It is not a surprise that today the media is not trusted and despised by a significant segment of the population.
Maybe it’s all the lying?

The Biden regime is not taking any chances with confrontations by real reporters. Earlier this week Biden’s deputy press secretary announced that “conspiracy” organizations will no longer be allowed in the White House… By that, he means conservative outlets.

Like their president, they are not willing or capable of answering difficult questions on their insane policies.

President Joe Biden’s press team may move to restrict the briefings held at the White House to liberal mainstream media outlets, if language from the new President’s deputy press secretary is more than just talk.

“Organizations or individuals who traffic in conspiracy theories, propaganda and lies to spread disinformation will not be tolerated,” TJ Ducklo, Biden’s deputy press secretary, said in a statement to Politico, “and we’ll work with the WHCA to decide how to handle those instances moving forward.”

Given liberal media figures’ extremely wide-ranging definition of “disinformation,” it appears possible to be likely that any journalist or reporter who is critical of Biden policies “will not be tolerated” at the White House.

Of course, it should be noted that anything to the right of Joseph Stalin is considered “conspiracy” by today’s far-left gatekeepers.

Questioning climate science, reporting on election fraud, or exposing flawed COVID science will get you banned and silenced by the elites.