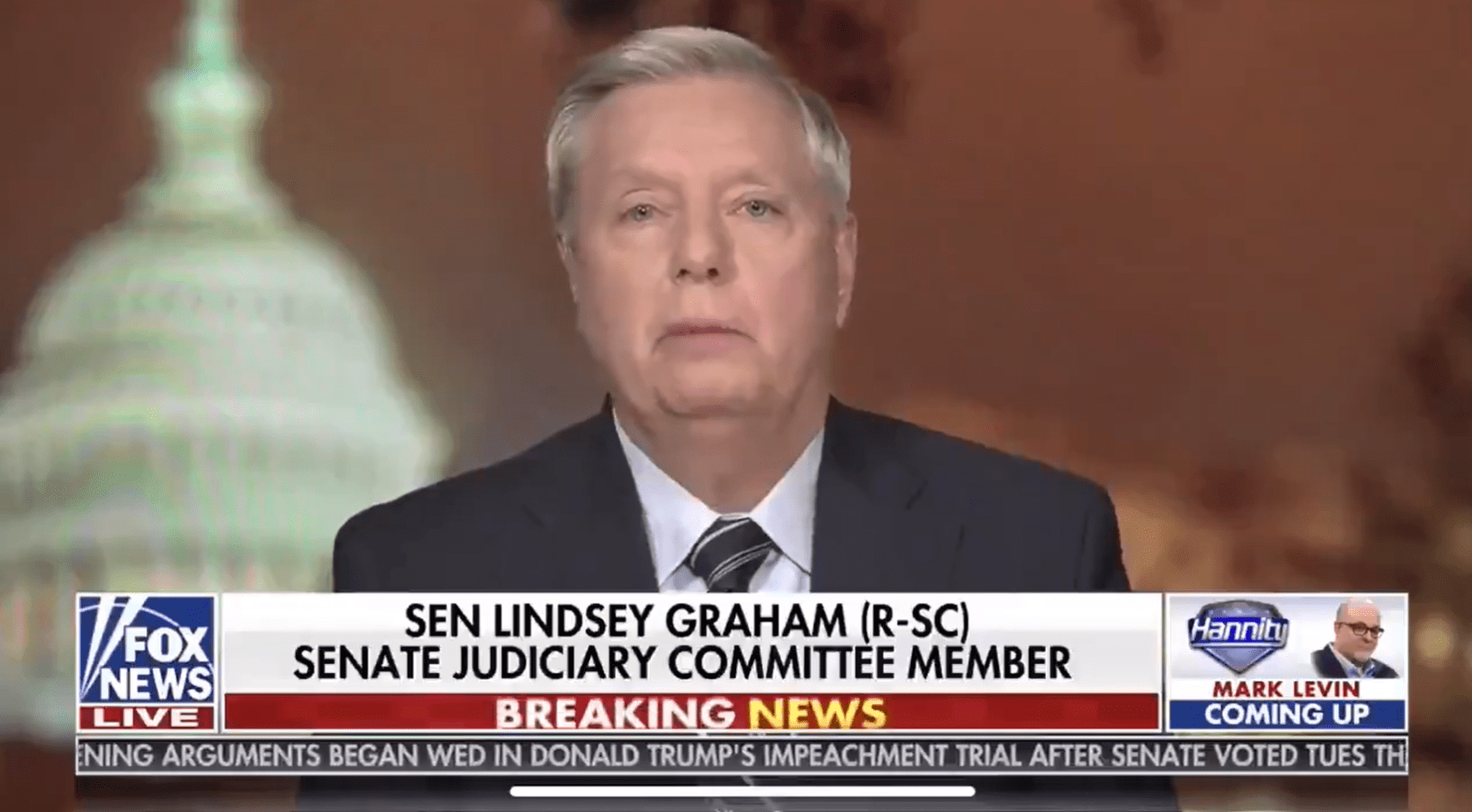 We have more good news on the sham Dem impeachment front.

He not only said most Republicans view it as “offensive and absurd” but he also claimed that the vote to acquit Trump is growing.

Lindsey Graham tells Hannity “the not guilty vote is growing after today” and adds that he thinks most Republicans found the presentation by the House Managers “offensive and absurd” pic.twitter.com/rZ9N3tOUay

Let me tell your viewers: the “not guilty” vote is growing after today. I think most Republicans found the presentation by the House managers offensive and absurd. We all know what happened at the Capitol was terrible. I hope everybody involved that broke into the Capitol goes to jail. But I don’t remember any of the House managers saying a damn thing when they were trying to break into my house and going after [Republican Senator] Susan Collins [of Maine] and spitting on all of us. If this is a problem for a politician to give the speech that President Trump did, well, then [Vice President] Kamala Harris has a real problem, because she actively engaged in bailing out rioters. And here is what I would suggest. if you are a politician trying to raise bail for people accused of rioting, you are inciting more riots. But here’s something that nobody talked about that is important. If there was preplanning, there was no incitement. … The managers have got this cockamamie idea absurd theory that Donald Trump wa monitoring the Proud Boys’ website, and other far right websites, and that he and [former White House social media manager] Dan Scavino knew this was going to happen and they encouraged it. That is Looney Tunes. And you know why they are saying that? Because if the president didn’t know, and it was actually preplanned, he is not guilty. So for the first time today, they are trying to create a storyline that Donald Trump was in on it before it happened, that he was monitoring the proud boys and other crazy websites and he knew they were come to Washington with violence on their mind, and he encouraged it. That beyond bizarre. This is not evidence. This is a liberal democratic novel being presented as evidence.

This whole impeachment has been an embarrassment.

The only things the Democrats have are lies and falsehoods and they are using both to attack Trump.

We know what the real reason they are pushing impeachment is.

They are scared of Trump.

It will be interesting to see who these new “not guilty votes” are.

Will any Democrats vote not guilty?

Lindsey Graham is likely talking about some of the weak-kneed Republicans who voted to have this in the first place.

When Trump is acquitted Democrats will only have succeeded in wasting money, time, and further dividing the country.