Obama-Appointed Judge Who is Sister of Stacey Abrams Blocks Purge of 4,000 Voters in Georgia Before Senate Runoff Election 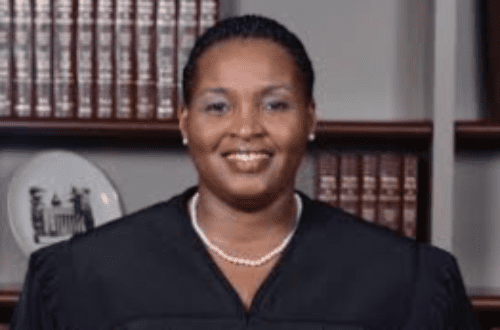 Federal judge Leslie Abrams Gardner just blocked 4,000 votes from being purged from voter rolls in Georgia ahead of the Jan. 5 runoff elections that will decide control of the U.S. Senate. On Monday, the Obama-appointed judge who also happens to be the sister of Stacey Abrams, ordered two counties to reverse a decision to remove more than 4,000 voters from voter rolls.

The Muscogee County board filed a motion on Monday arguing that Judge Gardner must remove herself from the case based on her relationship with her sister. The board also noted the involement of Stacey Abrams in controversial voting rights groups ho are in hot ater over their tactic.

MEMORANDUM IN SUPPORT OF MOTION FOR RECUSAL

“The Court has reviewed the motion and finds no basis for recusal.”

Stacey Abram has been involved in questionable voting rights groups that are currently under investigation:

Does the left care if “voting in Georgia when you are not a resident of Georgia is a felony?” Apparently, they don’t. Two reasons why they don’t care could be that they feel the end justifies the means, and they know they won’t be punished. Our voting system has become a free-for-all where people can do as they please. It’s a hot mess…

Even though the Georgia Secretary of State just announced investigations into illegal activities by voter registration groups, will they be punished? Until punishment is given to these criminals, voter fraud will continue.

Georgia’s Secretary of State Brad Raffensperger has announced an investigation into a voter registration group founded by former gubernatorial candidate Stacey Abrams and led by Democrat Raphael Warnock. The group is under investigation for allegedly sending ballots to residents in other states. This comes as the news that Democrats promote a movement where Democrats would move to Georgia to vote in the January 5th Senatorial runoff.

Investigations into voter registration scams come before the two critical runoff elections that could flip the Senate to Democrats. This would mean that the far-left agenda would sail through.

Even though the Secretary of State says, “These third-party groups have a responsibility not to encourage illegal voting. If they do so, they will be held responsible,” the New Georgia Project was also investigated in 2014 with allegations it forged voter registration applications.

Stacey Abrams and Warnock have been investigated before now. Has anything been done? Nope…According to the Washington Free Beacon, a case was referred to law enforcement in 2017, but charges were never brought.

In April of last year, the Georgia Ethics Committee launched an investigation into Abrams. Our previous report below:

Georgia’s new director of the state ethics commission started his job on Monday and wasted no time getting down to business.

Former county prosecutor David Emadi plans to subpoena bank records from the campaign of 2018 Democratic gubernatorial nominee Stacey Abrams and groups that raised money for her.

“The new ethics chief…a Kemp donor and former Republican Party leader…is using his power to threaten and lob baseless partisan accusations at the former Abrams campaign when they should be focused on real problems like the unethical ties between the governor’s office and voting machine lobbyists instead.”

After Emadi was introduced to the media as the new ethics commission director, he discussed that the investigation into the Abrams campaign is “moving forward”:

“Those investigations are all moving forward. What I can say about the investigation into the Abrams campaign is, in the relatively near future, I expect we will be issuing subpoenas for bank and finance records of both Miss Abrams and various PACs and special-interest groups that were affiliated with her campaign.”

The investigations began after an audit of Abram’s campaign:

Abrams still hasn’t conceded to Georgia Governor Brian Kemp but has been touted as a possible candidate for U.S. Senate, President, Vice-President and a 2022 run for Governor of Georgia…

Emadi means business and has vowed to be neutral and stick to the facts.

He even vowed not to vote during his tenure.

During a speech to Al Sharpton’s National Action Network, Abrams delivered the unbelievable claim that “We won”.

She goes on to explain why she still hasn’t conceded.

“We had this little election back in 2018. And despite the final tally and the inauguration and the situation we find ourselves in, I do have very affirmative statement to make. We won.”

Abrams on why she didn’t concede: “I refused to concede because, here’s the thing: concession needs to say something is right and true and proper. … You can’t trick me into saying it was right.” Republicans “stole” the election from “the voters of Georgia.”

"We had this little election back in 2018. And despite the final tally and the inauguration and the situation we find ourselves in, I do have very affirmative statement to make. We won.” pic.twitter.com/8FED6azZmr

Abrams has continuously claimed black votes were suppressed by her opponent in the Georgia governor’s race. Brian Kemp won the race by 54,000 votes but Abrams still won’t concede.

She’s been touted as a VP pick for Biden if he runs for president. She has also said she hasn’t ruled out her own run for president in 2020.

She appeared on ‘The View’ where she claimed the fight wasn’t ‘fair’ so she would never know if she really lost the race.

Stacey Abrams says she “absolutely” stands by her decision not to concede in the Georgia gubernatorial race. “I can’t say that empirically I won but I will never know because we did not have a fair fight.”

Stacey Abrams says she "absolutely" stands by her decision not to concede in the Georgia gubernatorial race.

"I can't say that empirically I won but I will never know because we did not have a fair fight." Via ABC pic.twitter.com/5divvS4pPr

The politicians of today’s left just can’t concede but continue the delusion aided by the leftist media enablers.

OUR PREVIOUS REPORT ON ABRAMS’ REFUSAL TO ACCEPT HER ELECTION LOSS:

Stacey Abrams lost the election for governor of Georgia by 50K votes but is still making the rounds trying to convince people that the election was illegitimate. Did Abrams go to the Hillary Clinton School of Election Loss Denial? It’s all about Stacey and keeping her name out there. She joined Jake Tapper to make claims that are just not true. Why give this woman a platform to divide but…THIS IS CNN.

“The law, as it stands, says that he received an adequate number of votes to become the governor of Georgia, and I acknowledge the law as it stands. I am a lawyer by training and I am someone who’s taken a Constitutional oath to uphold the law, but we know sometimes the law does not do what it should and something being legal does not make it right. This is someone who has compromised our systems. He has compromised our Democratic systems and that is not appropriate.”

Something tells us Abrams won’t fade away but will continue to be a divisive politician. Maybe that’s why she lost.

“He is the legal governor of Georgia and here’s the thing, Jake. I want to be very clear. Words have meaning and I’ve spent my lifetime not only as an attorney, but, as a writer and I’m careful of the words I choose. When he takes the oath of office he will be the legal governor of the state of Georgia, the legal victor, but what you are looking to me to say is that there was no compromise of our democracy and that there should be some political compromise in the language I use and that’s not right. What’s not right is saying that something was done properly when it was not.”

“I will never deny the legal premature that says he is in this position and I pray for his success, but will I say that this election was not tainted, was not a disinvestment and disenfranchisement of thousands of voters? I will not say not.”

ABRAMS HAS A MAJOR CASE OF SOUR GRAPES!

3 thoughts on “Obama-Appointed Judge Who is Sister of Stacey Abrams Blocks Purge of 4,000 Voters in Georgia Before Senate Runoff Election”