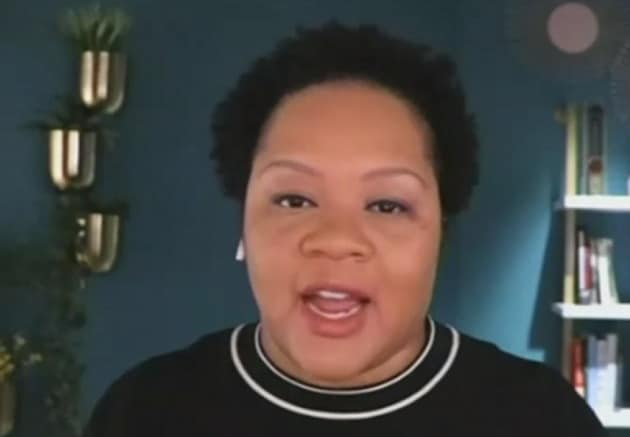 It’s really sickening what passes for journalism these days.

Yamiche Alcindor of PBS, a taxpayer funded outlet, is a cheerleader for Democrats and has been a constant critic of Trump over the last four years.

During a recent appearance on MSNBC, Alcindor accused Trump supporters of racism and even claimed she could back this up by saying she spoke with Trump supporters who were obsessed with race.

First, are we supposed to believe she actually spoke to Trump supporters? Second, it is the left which is obsessed with race.

In the past couple of days, the White House correspondent for the taxpayer-funded PBS NewsHour, Yamiche Alcindor, has been throwing around accusations of racism not only against a “large majority” of Donald Trump supporters who fear a “browning of America,” but also against the U.S. generally, claiming that minorities are not “treated as equal citizens.”

On Monday’s Morning Joe on MSNBC, as the show’s regulars freaked out over a Fox News poll finding that 47 percent of Americans still approve of how President Trump’s job performance, MSNBC contributor and longtime show regular Donny Deutsch reiterated his recurring claims that racism is to blame for so many Americans supporting the President, proclaiming that his substantial support is a problem that “has to be dealt with.”

ALCINDOR: There is this real elephant in the room — even when you talk about policy that Trump supporters — the ones that I’ve interacted with — not all of them, but a large majority of them do bring up the issue of race. They do bring up their fears of the unknown — of African Americans — of Latinos — of this kind of browning of America. That is just something that has been — that needs to be covered — that needs to be said out loud.

…And I keep thinking about that man in Wisconsin who looked at me and said, “How could you possibly have a job and make more money than me?” And I said, “Well, sir, my parents went to college, I went to college. That’s part of how I earned this job.” But he didn’t want to hear it, and he didn’t want to talk about health care even though that’s what I wanted to talk to him about. He wanted to talk about the fact that he was worried that a black girl like me was a threat to his future.

See the video below:

Why should Americans be forced to fund an outlet that insults them and accuses them of being racists?