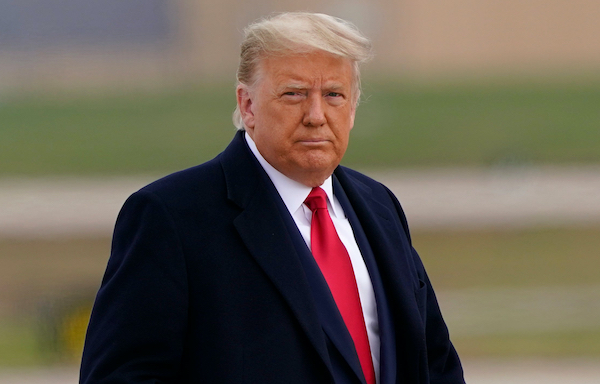 Former President Donald Trump has released a new statement on alleged voter fraud during the 2020 election and specifically how the media distorts it.

The comments from President Trump were first reported by Forbes reporter Andrew Solender.

“Statement by Donald J. Trump, 45th President of the United States of America,” read the headline of the announcement.

“Why is it that every time the 2020 ELECTION FRAUD is discussed, the Fake News Media consistently states that such charges are baseless, unfounded, unwarranted, etc.?” the former President said. “Sadly, there was massive fraud in the 2020 Presidential Election, and many very angry people understand that. With each passing day, and unfortunately for the Radical Left CRAZIES, more and more facts are coming out.”

President Trump finished: “Other than that, Happy Easter!”

The election was over four months ago however Republicans are still fighting the 2020 results.

On Thursday, the Arizona state Senate announced they had hired four different companies to perform a forensic audit along with a hand recount of the 2020 election results in Maricopa County.

“The scope of work will include, but is not limited to, scanning all the ballots, a full manual recount, auditing the registration and votes cast, the vote counts, and the electronic voting system,” said a press release from Arizona Senate Republicans.

Cyber Ninjas, a company based out of Florida, will be leading the audit. Their website explains that the company “specializes in all areas of application security, ranging from your traditional web application to mobile or thick client applications. Within these disciplines we offer ethical hacking, training, and general consulting.”

Check out what KTAR News reported:

Wake Technology Services provides information technology services, according to its website. Its members performed hand counts of 2020 election results in Pennsylvania, where the company is based, and New Mexico, according to the Arizona Senate’s press release.

Virginia-based CyFIR and Texas-based Digital Discovery are cybersecurity companies that offer forensic services, according to their websites.

Last month, Maricopa County authorized an audit of its election equipment and software. It was completed by SLI Compliance and Pro V&V and didn’t reveal any irregularities, the county said on Feb. 23.

The state Senate emerged victorious in its quest for access to the metro Phoenix machines and ballots three days later, when a judge ruled that its subpoenas were enforceable.

Before then, the Maricopa County Board of Supervisors, which consists of four Republicans and one Democrat, turned over reams of data but balked at handing over the actual ballots or the tabulation machines.

The supervisors in the state’s largest county argued that the ballots were by law secret and the machines would be compromised. They also pointed to multiple tests of the voting machines done before and after the election and hand counts of a sample of ballots that showed the tabulation was accurate.

On Feb. 8, the Senate fell one vote short of finding the board in contempt, which would have made the supervisors subject to arrest.

Republicans, according to them, are pushing for audits to restore faith in America’s election process considering there were many irregular events that took place in the 2020 election.

“Our voters expect this audit, and it can be a big step in returning trust and confidence in our election process,” said Senate President Karen Fann in early March.

Democrats however, are very upset and do not want any irregularities in the 2020 election to be audited or investigated.

“This entire charade is only keeping the flame of fraud lit, and we’ve seen how gaslighting voters into thinking their election was stolen has to end,” Senate minority leader and Democrat Rebecca Rios said.