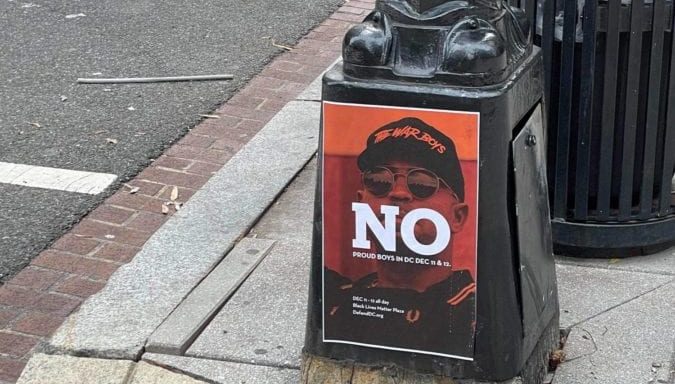 Posters have been going up around D.C. warning that the “Proud Boys,” a group of badass men who chased the masked Antifa cowards out of DC on Nov. 14, are not welcome in DC during the March for Trump rally on Dec. 12.

Antifa cowards were shocked when they were met with brute force after surrounding and attacking several innocent Trump supporters, including women, children, and the elderly, who broke away from the massive crowd to head back to their vehicles or local hotels where they were staying.

The Proud Boys just mopped the floor with Antifa and BLM:

More video of the proud Boys:

What are Americans supposed to do if the police can’t protect them? Fight back or be assaulted?

Say what you will about the Proud Boys. Right now, they are the most effective law enforcement Washington DC has. pic.twitter.com/r4vucJCUpP

A BLM terrorist with a knife was knocked out by the Proud Boys:

A female BLM/ Antifa protester had a switchblade knife that was taken from her after she was knocked out by Proud Boys. pic.twitter.com/i2MHSrHzdi

Yesterday, Proud Boys chairman Enrique Tarrio posted a notice on Parler that they would again, be heading to DC for the March for Trump rally. In his post, Tarrio, who goes by “Wartime Tarrio” on Parler, wrote:

Under NO circumstances do we concede defeat! We are fighters, we have truth and the rule of law on our side, we are patriots. We stand behind what is right and just, we stand behind our President who stands for us. That is why patriots from all across the country are converging in DC tomorrow. SO MUCH IS AT STAKE! Show your support for the most patriotic leader we’ve had since the founding of this great country, while also showing support for your favorite boys in black and yellow and let them all know…. GW is my homeboy 👊 #dontgiveuptheship #election2020 #FUCKANTIFA #neversurrender #stopthesteal #americansupremacist #patriot #threads #1776 #drip #liberty #swag #proudboys

This afternoon, Proud Boys stood in the center of the DC streets, surrounded by a massive crowd of Trump supporters, shouting, “F*** Antifa!”

Everyone joins in on the “Fuck ANTIFA” chant in DC pic.twitter.com/bdG3J6dWoM

Last night, hundreds of Trump supporters who refuse to be threatened or intimidated by a bunch of cowardly, masked, violent, crybabies stood in the streets of DC shouting, “F*** Antifa!”

Three hours ago, Enrique Tarrio posted an image of himself on Parler, standing on the steps of the White House next to two armed Secret Service agents. In his post, Tarrio claims he was invited to the White House to an undisclosed location, adding, “Wow…I am in awe. #Trump2020”

The White House told the New York Post that Tarrio was on a public White House Christmas tour. “He did not have a meeting with the president, nor did the White House invite him,” a statement said.

Tarrio did not say who the “last-minute invite” came from. White House tour tickets are typically arranged by requesting tickets through members of Congress and usually require making a request months in advance, especially with crowd sizes restricted because of the coronavirus.