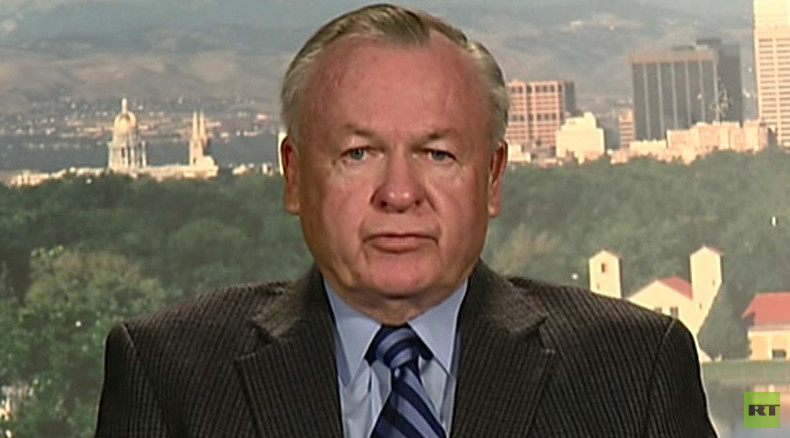 Major General Paul Vallely: QAnon is tied to information that comes out of a group called the Army of Northern Virginia. A group of military intelligence specialists of over 800 people that advise the president. Most of them are special operations type of people. And this is where Q picks up and gets some of their information.

QAnon is a white hat information system that gathers information intelligence and puts it out through a distribution that’s called Qanon. Most of the reports that come in from Q are very valid.

More information about the Secret Army of Northern Virginia:

They take their orders directly from the president or the secretary of defense. They stroll through foreign embassies in civilian clothing, eschewing the uniforms worn by their military cohorts. During combat, they wear no identification of any kind, neither rank nor name. They have gone by many names: the Secret Army of Northern Virginia, Task Force Green, Task Force 121. Their leaders rarely speak in public, and they have no unclassified website. They killed Osama bin Laden.

They are the Joint Special Operations Command, or JSOC, and they are America’s secret army.

“We’re the dark matter. We’re the force that orders the universe but can’t be seen,” a Navy SEAL member of JSOC said, speaking on the condition of anonymity in the Washington Post article, “ ‘Top Secret America’: A look as the military’s Joint Special Operations Command.”

JSOC’s covert nature is matched only by its ever-expanding capabilities.

Since its creation in 1980, JSOC has grown from 1,800 troops before Sept. 11, 2001 to its current size of about 25,000. The group is multifaceted in the extreme: it has its own intelligence division, drones and reconnaissance planes and its own dedicated satellites. It even has its own cyber division, responsible for shutting down every jihadist website known to them on Sept. 11, 2008, according to the Washington Post article.

Accountability is nearly nonexistent for the JSOC operative. The president has bestowed upon JSOC the rare authority to place people on a kill list and then, well… kill them, all with apparent impunity. The list is not normally coordinated with other intelligence agencies, such as the CIA, which has a similar, but shorter, list of names.

“There are legal restrictions on what the CIA can do in terms of covert operations. There has to be a finding, the president has to notify at least the “Gang of Eight” (leaders of the intelligence oversight committees) in Congress. JSOC doesn’t have to do any of that… There is very little accountability for their actions,” Marc Ambinder, a JSOC researcher, said in the article “How the Pentagon’s Top Killers Became (Unaccountable) Spies” on wired.com.

Assassination is prohibited by U.S. law, but for JSOC it appears to be business as usual. Not only does the group carry out the missions, it conducts the investigations, identifies the targets and drops the hammers, all with virtually no Congressional oversight.

Granted, the highly efficient attack that killed Osama bin Laden represented a high water mark of U.S. intelligence gathering and military response, but did the end justify the means?

Most would respond to that question with an emphatic “yes” and I would normally be inclined to agree. However, the existence of an unchecked secret army whose members lumber across the face of the earth like jolly green giants with guns inspires feelings of nervousness rather than security.

Add to this the fact that last year President Barack Obama signed a four-year extension for three important provisions of the Patriot Act – roving wiretaps, searches of business records, and surveillance of individuals not connected to terrorist groups but only suspected of terrorism – and the situation becomes downright frightening.

It seems every year the already ill-defined term “terrorist” becomes more and more vague. Under current law, the government only has to claim someone is a terrorist in order to monitor their every movement. And with JSOC, an entity operating on the fringe of government policy with the ability to play judge, jury and executioner, it may be only a short step from being placed under surveillance to be being placed on a kill list.

QAnon is a disproven and discredited far-right conspiracy theory alleging that a secret cabal of Satan-worshipping, cannibalistic pedophiles is running a global child sex-trafficking ring and plotting against former U.S. president Donald Trump, who has been fighting the cabal. According to U.S. prosecutors, QAnon is commonly called a cult.

QAnon commonly asserts that Trump has been planning a day of reckoning known as the “Storm”, when thousands of members of the cabal will be arrested. QAnon supporters have accused many liberal Hollywood actors, Democratic politicians, and high-ranking government officials of being members of the cabal. They have also claimed that Trump feigned conspiracy with Russians to enlist Robert Mueller to join him in exposing the sex trafficking ring and preventing a coup d’état by Barack Obama, Hillary Clinton, and George Soros. The QAnon conspiracy theories have been amplified by Russian state-backed troll accounts on social media, as well as Russian state-backed traditional media.
more->https://en.wikipedia.org

Paul E. Vallely (born November 29, 1939) is a retired U.S. Army major general and senior military analyst for Fox News. He served in the Vietnam War and retired in 1993 as deputy commanding general, Pacific Command. In 2004, together with retired Air Force lieutenant general Thomas McInerney, Vallely co-authored the book Endgame: The Blueprint for Victory in the War on Terror. Vallely currently serves as the military committee chairman for the Center for Security Policy and has lent his support to the organization Veteran Defenders of America.
more->https://en.wikipedia.org