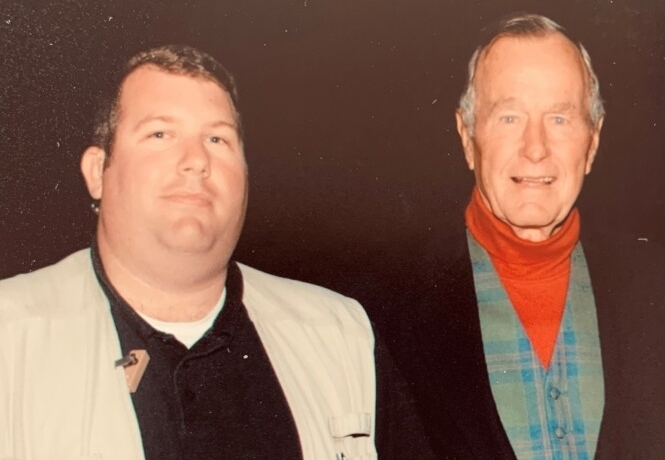 A 50-year-old secret service agent died while training during his shift at the Bush family compound at Walker’s Point in Kennebunkport.

An autopsy has been conducted, but the cause of death was not released.

The Portland Press Herald reported that the service held Saturday at Laurel Hill Cemetery in Saco with a heavy presence from local law enforcement agencies, troopers from the Maine State Police, and Secret Service agents.

In a statement, former President George W. Bush said he and his wife Laura “were saddened by the sudden loss of Keith Mills.”

“Laura and I were saddened by the sudden loss of Keith Mills,” Bush said in a statement.

“Keith was a dedicated public servant and exemplary member of the United States Secret Service. My family had the good fortune of knowing Keith well, and now our thoughts are with Keith’s family – particularly his children. We join them in mourning the loss of a kind, funny, patriotic man,” Bush added.

Mills joined the Kennebunkport Police Department in 1992 and left the department in 2002 to join the Secret Service.

Keith then joined the United States Secret Service as a special officer, working for decades as part of the protection detail for President George H.W. Bush and most recently President George W. Bush.

Keith was very active in law enforcement circles beyond the U.S. Secret Service, as his job as a special officer took him all over the country and the world. Keith was a firearms expert and a certified rescue diver for FEMA.

Keith instructed at the Maine Criminal Justice Academy and with other numerous federal and local law enforcement agencies.

Keith Mills, an Arundel resident who was also a Secret Service officer protecting former presidents George H.W. and George W. Bush, has died, during training at Walker's Point. @MelanieCreamer has a remembrance.https://t.co/nwUL6h8ZYC

Keith was kind and considerate. While generally reserved, his sense of humor could either break the ice in a delicate situation or just absolutely crack up an entire room into loud laughter. He was funny, he could be a prankster sometimes, but mostly he was a voice of reason, love, and caring.

He mentored all that knew him in some way, though he wasn’t necessarily trying to do so. He leaves a hole in our lives that cannot be filled and he will never be forgotten. The world is a better place, as our lives are better lives because he was in it.

Keith was also active with the American Legion in Kennebunkport, serving as treasurer.