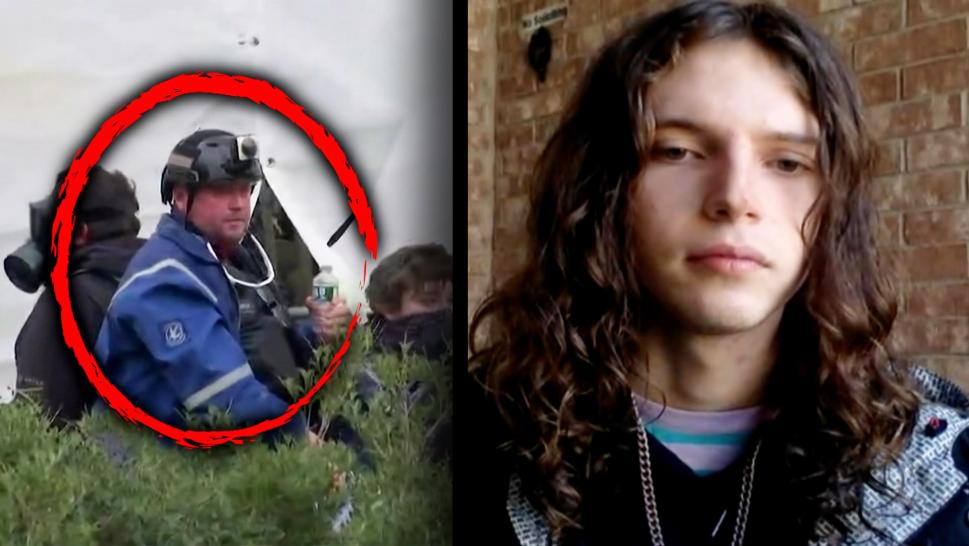 Teen Jackson Reffitt is speaking out after reporting his father to the FBI for allegedly taking part in the Capitol riots earlier this month. The 18-year-old told Inside Edition he is now in hiding.

“I don’t want to be afraid for my life, and I don’t think I will be, because I know that I have so many people backing me,” Jackson said.

Video from the insurrection shows his father, 48-year-old Guy Reffitt, on the steps of the Capitol wearing a helmet with a camera attached, a blue jacket and what appears to be a bulletproof vest.

Jackson says that when his dad returned home, he warned the family, ”If you’re a traitor, you get shot.”

“I took it as a threat personally,” Jackson added.

According to Jackson, Guy Reffitt is a member of Three Percenters, a far-right, anti-government militia group. After Jackson turned his dad into the FBI, Guy Reffitt was charged with obstruction of justice and unlawful entry. He told agents he was at the Capitol, but insists he never went inside.

Jackson said he has not spoken with his parents in several days.

“It’s a lot on my mind, because I feel responsible,” the teen said.

When asked if he would do it again, Jackson said, “Yes sir, I would.”

Guy Wesley Reffitt is the Texas man who made headlines after his teenage children told investigators Reffitt threatened to shoot them if they turned him over to the FBI. According to the criminal complaint, Reffitt initially boasted to his family about being at the U.S. Capitol on January 6 in order to “protect the country.” But a few days later, Reffitt became concerned the FBI was “watching” him and warned his children not to say anything about his role that day.

Reffitt was arrested on January 16 and faces a federal charge for obstruction of justice. As of this writing, he remained behind bars at the Fannin County Jail, inmate records show. Reffitt does not yet have a defense attorney listed on his case, according to a search of federal court records.

There is video footage of Reffitt outside the Capitol building on January 6, according to the criminal complaint. He was filmed wearing a “blue jacket over what appears to be a black padded or tactical-style vest, and he has a black helmet on his head with what appears to be a Go-Pro-style camera attached.” Footage depicting Reffitt was shared online by Reuters on January 6 and aired on Fox News at Night With Shannon Bream the following day, according to the complaint.

Reffitt does not appear to have gone inside the Capitol but was stationed “at or past the police line protecting the building” when the demonstration turned violent. The criminal complaint further specifies Reffitt was standing “on the West Front of the U.S. Capitol Building, on the north staircase, between the Lower West Terrace and the Middle Landing of the Lower West Terrace.”

The FBI special agent who prepared the affidavit wrote that the footage shows Reffitt using a water bottle to clean his eyes. The agent noted that demonstrators and law enforcement officials had sprayed “chemical irritants” in the crowd and it appeared Reffitt had been hit in the eyes.

According to the criminal complaint, the FBI agent identified Reffitt by comparing the images from the Capitol to Reffitt’s driver’s license photo. Reffitt’s cell phone provided additional evidence: “GPS data associated with REFFITT’s cell phone places the phone on January 6, 2021, in Washington, D.C., and specifically near the area of the U.S. Capitol Building,” the complaint explains.

FBI agents executed a search warrant at Reffitt’s home in Wylie, Texas, on January 16. The affidavit states that Reffitt admitted to the agents that he had been at the Capitol but did not go inside. He also told the agents he had brought a “Smith & Wesson pistol” with him but “had disassembled it to comply with the law in Washington, D.C.”

According to the criminal complaint, Reffitt’s wife and teenage daughter were present during the search warrant. Reffitt’s 18-year-old son, Jackson, came over to the house while the search was underway. Reffitt’s son told the FBI agents that on January 8 and “in the ensuing days,” Reffitt had talked about how he had gone to Washington, D.C. to “protect the country” and that Reffitt had said, “we stormed the Capitol.” Jackson Reffitt added that his father had “recorded some of the events on his Go-Pro camera” that he’d strapped to his helmet.

Jackson Reffitt told NBC station KXAS-TV that he blames President Donald Trump for inspiring his father’s actions and believed the president had “manipulated even my own family members.” The teen said Guy Reffitt bought into Trump’s unfounded claim that the election had been stolen from him. When asked about the relationship with his father, Jackson Reffitt told the TV station, “I love him, but I hate him.”

2 thoughts on “Teen Says He’s in Hiding After Turning in Dad, Guy Reffitt, for Alleged Role in Capitol Riots”