Volcano Erupts On St. Vincent, Officials Will Only Evacuate Those Who Are Vaccinated 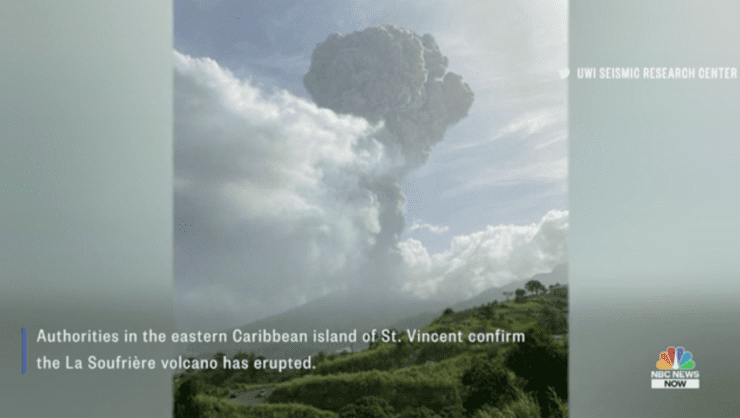 The powers that be have taken their control of your lives to an insane level now deciding who lives and dies on a small island based on their vaccination situation.

A volcano appears to be set to erupt on the Caribbean island of St. Vincent and officials are only going to evacuate people who have been vaccinated against coronavirus, ABC News reported.

Empty cruise ships were scheduled to arrive Friday at the eastern Caribbean island of St. Vincent to help transport thousands of people who evacuated their homes under the fiery glow of La Soufriere volcano which officials said could erupt at any moment.

Shelters filled up overnight as people living in the northern part of the island sought safer ground under government orders, with a string of car lights twinkling through the darkened mountains.

“They are settling in quite nicely,” shelter deputy manager Doris McIntosh said to ABC News, though, she said, meals had not been served yet. “Because of rushed evacuations, some things are not in place.”

But what was more terrifying for the island residents and tourists is that Prime Minister Ralph Gonsalves said only those who are vaccinated would be evacuated.

“Many worried that evacuation efforts would be hampered by the pandemic, with Gonsalves noting that the cruise ships and other islands would require evacuees to be vaccinated. He also said he was working with other Caribbean governments to ensure that they could accept an ID card since not everyone has a passport,” ABC News said.

“Gonsalves added that he highly recommends those who opt to go to a shelter in St. Vincent and the Grenadines, an island chain of more than 100,000 people, be vaccinate,” it said.

According to The World Health organization only 10,805 people on the island nation of 110,600 people have been vaccinated.

Royal Caribbean Cruises and Carnival have both sent ships to help evacuate those on the island, but Carnival said that it would not require evacuees be vaccinated.

“Carnival Legend and Carnival Paradise are offshore from St. Vincent, awaiting further instructions from local officials on how Carnival Cruise Line can support the evacuation of local residents who are under threat from volcano La Soufriere. Carnival and Royal Caribbean are also working to coordinate our collective efforts for a seamless operation once the embarkation of residents begins.  There is no time yet set for when these evacuation sailings will commence,” it said.

“Nearly 20,000 people are out of their homes on the Caribbean island of St. Vincent after the first volcanic eruption there in more than forty years,” O’Donnell said. “The volcano sent a thick cloud of smoke 20,000 feet into the sky, spewing ash for miles.”

“Cruise ships are evacuating people from the island, but only those vaccinated against COVID,” O’Donnell concluded.

The volcano has erupted on Friday for the first time in more than four decades.

“The ash column is starting to fall back down around the volcano,” Seismic Research Centre at the University of the West Indies director Erouscilla Joseph, said to The Washington Post “It is possible that there will be some property damage. This could go on for days, weeks or even months.”

Red Cross volunteer and St. Vincent resident Oshea Collis, 25 said that she heard the first eruption as she was gathering supplies.

“It was like several thunder [claps] at the same time,” Collins said. “People were screaming as soon as it began. It was total chaos. Everything was paralyzed and people ran to their homes.”

“I am scared,” she said. “But I need to help more people, so I’m trying to control it.”

5 thoughts on “Volcano Erupts On St. Vincent, Officials Will Only Evacuate Those Who Are Vaccinated”