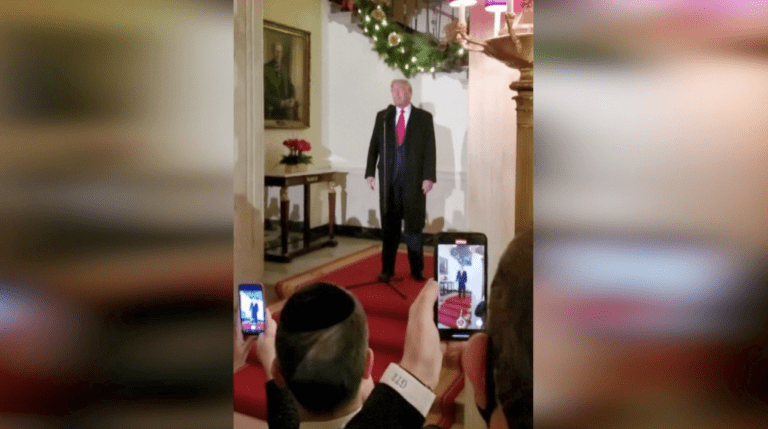 The first in written form, from the White House website.

During this holiday season, the First Lady and I send our warmest greetings to the millions of Jewish people in the United States and around the world as they begin the celebration of Hanukkah and the miracle that kept the flames of the menorah burning in the Second Temple for eight nights.

The candle-lighting tradition that began over 2,000 years ago is rooted in perseverance and faith—two virtues that are indicative of the Jewish culture and the Jewish faith.

This year’s observance of the Festival of Lights comes at a time when the unbreakable bond between the United States and Israel has never been stronger.  Over the past four years, my Administration has stood in unwavering solidarity with the Jewish people.  In recent months, we brokered historic peace deals between Israel and major Arab countries, including the United Arab Emirates, Bahrain, and Sudan, ushering in unprecedented opportunities for enhancing stability and prosperity in the region.  As we enter this season of celebration and reflection, we must continue to build on this progress and work toward a brighter and more secure future in the Middle East and around the world.

Over the next eight days, families and friends will gather to carry on the time-honored tradition of lighting the menorah.  The First Lady and I wish you all a joyous celebration.  Happy Hanukkah!

And then a speech.

Does this sound like a man who thinks he lost?

Or a man who is giving up?

Nope — he’s fighting with everything he has!

And he just needs a couple people with courage to seal the deal.

Breakthrough is coming VERY soon folks, hang in there!

Trump tells White House Hanukkah party that if SCOTUS judges have ‘courage and wisdom’ he will win election https://t.co/p9jBZuaTzK pic.twitter.com/Z6LiZlFgRM

Participant at the White House Hanukkah party tells me President Trump is not scheduled to come out to light the menorah or address the crowd.

President Trump is celebrating Hanukkah at the White House with members of the Jewish community, as they chant ‘four more years!’ 😆 pic.twitter.com/II6AJlPU98

Pres. Trump at White House Hanukkah party: “Certain very important people, if they have wisdom and if they have courage, we are going to win this election.”@jacobkornbluh pic.twitter.com/MTO2dJP8Aa