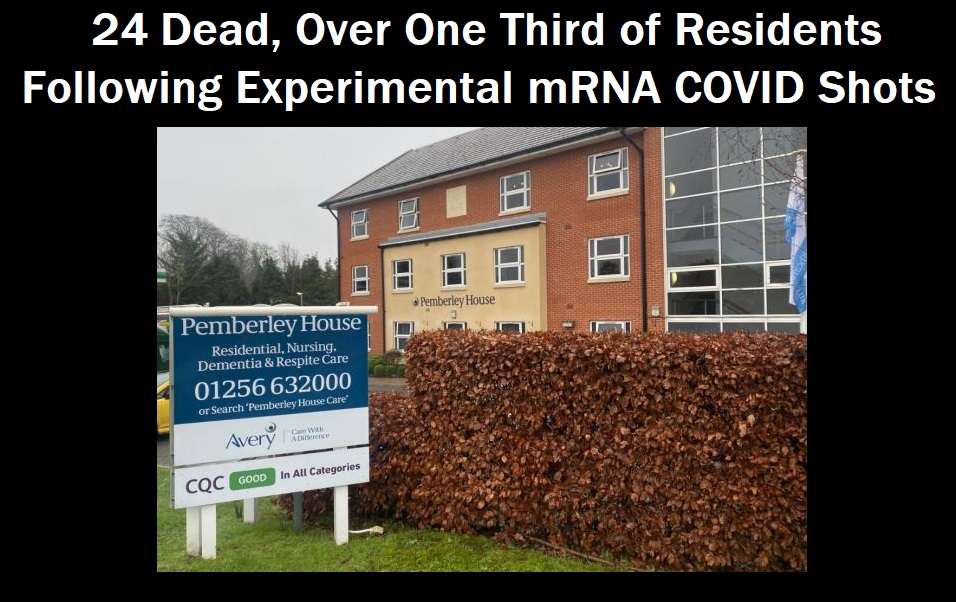 In what is becoming almost a daily report of massive nursing home deaths following injections of experimental mRNA COVID shots, a nursing home in the U.K. is reporting over one third of their residents have died after receiving the mRNA experimental COVID injections.

We are now seeing a very predictable pattern as we are reporting all over the world where the elderly are dying at a very alarming rate following mass vaccinations of the experimental mRNA injections.

And in all of these cases, the local media is quoting local officials as saying that the “vaccines” have nothing to do with the deaths. They are also stating that deaths following the experimental mRNA injections are “expected.”

How can people keep believing this is true? This is now happening all over the world, in many locations, and we are just supposed to accept by faith that COVID outbreaks happened simultaneously with the mass vaccinations, but that there is no connection to the injections?

Here is what the Daily Echo is reporting about the nursing home deaths in Basingstoke in the UK:

At least twenty-two people have died at a Hampshire care home (Daily Mail is reporting 24 deaths) in one of the worst known outbreaks of the coronavirus pandemic to date.

The outbreak was first declared on Tuesday, January 5, with 60 per cent of its residents testing positive for the disease, according to sources.

Within three weeks, 22 people had died – over one-third of the home’s residents.

It is understood the outbreak started as residents began to have their first coronavirus vaccines. The Medicines and Healthcare Products Regulation Agency (MHRA) said there was no suggestion the vaccine was responsible for the deaths.

Government advice states that one “can not catch Covid-19 from the vaccine but it is possible to have caught Covid-19 and not realise you have the symptoms until after your vaccination appointment”, adding that it may take “a week or two” after the first dose to build up protection.

A spokesperson for the MHRA said they were saddened by the deaths but said they were not linked to the vaccine patients might have received, saying: “We are saddened to hear about any deaths which have occurred since receiving COVID-19 vaccination. However, our surveillance does not suggest that the COVID-19 vaccines have contributed to any deaths.

It is not unexpected that some of these people may naturally fall ill due to their age or underlying conditions shortly after being vaccinated, without the vaccine playing any role in that.” Full Article.

However, many healthcare workers who work in these assisted living centers are now challenging this narrative, that these deaths are due to “natural illnesses” among the elderly that have nothing to do with the shots, including a whistleblower who is a Certified Nursing Assistant and went public with what he was seeing in his nursing home. He reported that:

And now they are dying. “They’re dropping like flies.” (Full article with video.)

The basic premise being used to justify saying that none of these deaths are linked to the experimental COVID injections is that “one can not catch Covid-19 from the vaccine,” which is the position of the FDA as well.

From the Daily Echo:

Government advice states that one “can not catch Covid-19 from the vaccine but it is possible to have caught Covid-19 and not realise you have the symptoms until after your vaccination appointment”, adding that it may take “a week or two” after the first dose to build up protection.

WILL THE MODERNA COVID-19 VACCINE GIVE ME COVID-19?
No. The Moderna COVID-19 Vaccine does not contain SARS-CoV-2 and cannot give you COVID-19.

Therefore, the reasoning continues, if these residents who died are all tested as positive for COVID-19, then, according to “Government sources,” they could not have died from the vaccines.

Do you see how this whole argument falls apart if the premise that the “vaccine” cannot give someone COVID-19 turns out to actually be false?

And the evidence so far points to the fact that this belief about a new product that has only been in the market for a few weeks and was fast-tracked to get it into the market, and supposedly cannot give someone COVID-19, is not true.

The largest mass injection campaign that has happened so far has occurred in Israel, and their data shows that over 12,000 people became infected with COVID-19 AFTER the injections. See:

12,400 People in Israel Tested Positive for Coronavirus AFTER Being Injected with the Experimental Pfizer COVID Shot

The correlations between the roll outs of these experimental mRNA injections and nursing home deaths is very clear.

The Daily Mail, while reporting on the tragedy at the Pemberley House Care Home in Basingstoke, also reported that similar rates of deaths are being seen throughout the UK in “care homes,” which they are blaming on the COVID virus. They produced this chart:

And while the government keeps blaming these deaths on the virus, what else happened in December when numbers of deaths were actually on the decline, until rapidly spiking upwards in January?

The roll out of the Pfizer, and later Moderna, experimental mRNA COVID injections began in December.

It is time to challenge the “official” position that because these injections do not contain a COVID19 virus, they cannot give someone the virus, because something is clearly causing these people who are dying “from COVID” to test positive.

Perhaps we should have a better understanding of just how these mRNA injections work.

Dr. Lee Merritt began her medical career at the age of four, carrying her  father’s “black bag” on housecalls, along the back roads of Iowa.  In 1980 she graduated from the University of Rochester School of Medicine and Dentistry in New York, where she was elected to life membership in the Alpha Omega Alpha Honor Medical Society.

Dr. Merritt completed an Orthopaedic Surgery Residency in the United States Navy and served 9 years as a Navy physician and surgeon where she also studied bioweapons before returning to Rochester, where she was the only woman to be appointed as the Louis A. Goldstein Fellow of Spinal Surgery.

Dr. Merritt has been in the private practice of Orthopaedic and Spinal Surgery since 1995, has served on the Board of the Arizona Medical Association, and is past president of the Association of American Physicians and Surgeons. (Source.)

We have copied the section of her interview with Alex Newman where she discusses the mRNA “vaccines.”

Well I have lots of concerns. Not the least of which is for the integrity and the moral turpitude of the medical profession.

If you look at the history of these vaccines, just real quickly, these are experimental biologics. I don’t even like to call them “vaccines,” because classically how a vaccine works is this: You grow a bunch of the pathogens, so let’s say its measles. You grow the measles in a vat or in eggs, and then you take a portion of that, and you make it less strong.

You attenuate it. You make it weaker, and there are different ways of doing that, and then you inject it into people, and their own immune system sees that weakened pathogen. And then they react to it just enough that it puts it in their immulogic memory.

And then when they’re exposed to it the next time, they memorize it and theoretically they can better respond.

That’s what your real body does when it gets sick. Without all this vaccination stuff, you get sick with a virus, you get perfect life-long immunity, for the most part, and it’s over.

So how is this (mRNA injections) different?

What they’re doing is programming mRNA. And mRNA has a little piece of, it’s like DNA, but it’s the messenger RNA.

It’s what makes proteins in the body. It’s kind of  like a computer chip that you put into a 3D printer and then you tell it what you want it to make, and it prints it out.

We have that in engineering, and this is the biological equivalent. I make some mRNA, and it tells your body to do certain things.

Well, in this case what they’ve done, they’ve made a piece of this mRNA to create in every cell in your body that spike protein. Or at least part of it.

And that spike protein, you’re actually creating the pathogen in your body.

This is where it gets a little wishy about how much of that spike protein is actually being created, and I don’t know how to find that out, I can’t find that, but I’m sure somebody knows.

They started after SARS, and they did cats. And then after that MERS, which were all coronavirus pathogens that are more deadly (then COVID-19), and after MERS they tried it in ferrets.

So what happened was all animals died.

Let me just point out. We have never made it through an animal study successfully for this type of virus.

We have never done this in humans before. At least we haven’t. Maybe the Chinese have.

We don’t really have a track record of success. This vaccine was rolled out to distribution centers before they even made a show of caring about the FDA approving it. Do you realize that?

I’ve never seen that happen before.

And the longest they’ve really followed people after the vaccine is two months.

That’s not enough time to know we won’t have that antibody enhancement problem.

On potential for military use:

I will make this military point. This is a perfect binary weapon.

The doctors can’t get at that data. The guys at the very top of this project, they know. But we don’t know.

So, do you still trust your government saying that these mRNA injections cannot cause someone to get COVID?

Or do the facts speak for themselves?

Because the data, the REAL facts, show that seniors are dying very suddenly just after the mRNA vaccination programs are started in these assisted living centers.

Who are the “guys at the top” of “this project” that truly know what these mRNA injections are programmed to do whom Dr. Merritt referred to?