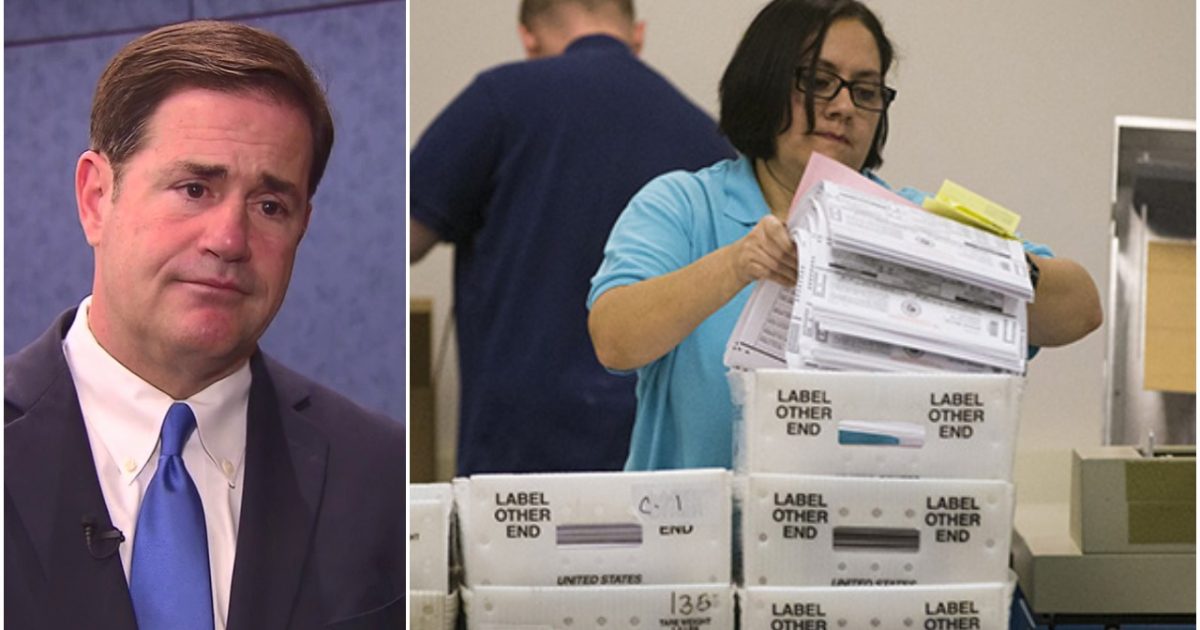 This is a deliberate slap in the face of the whistleblowers.

Throughout the day, hearings are being held by members of the Arizona state legislature in which explosive accusations of fraud are finally being revealed to the public at a time in which the fake news media refuses to cover them.

Right-wing pundit Michelle Malkin has summarized some of the most jaw-dropping allegations made during the hearing:

“We identified almost a dozen ways to inject or interdict to manipulate votes.” – Col. Phil Waldron, IT witness at #ArizonaHearing

The election-rigging foxes are guarding the henhouse — here in America and around the world.https://t.co/5P7yBzC19C#stopthesteal pic.twitter.com/MS9HS2M3G5

Illegal alien voters in AZ: Giuliani asks if any probe has been done. Waldron: No.

“You would have to be an idiot to think that no illegals voted in AZ.” – @RudyGiuliani

For such a time as this, COURAGE is required. https://t.co/vFQMABow4v

“Dominion machines were built to be manipulated.” – 1st witness at #ArizonaHearing

“Dominion machines were built to be manipulated.” – 1st witness at #ArizonaHearing

In a slap to the face of all the brave whistleblowers who have emerged to expose the fraud, Ducey announced he would be certifying the dubious vote while the hearing took place.

“The votes have been tabulated, all 15 counties have certified their results. In addition to certification, the senator-elect Mark Kelly winning the general election, I will be signing official documentation today to be hand-delivered to the secretary of the United States Senate so that America’s newest senator can be sworn into office as swiftly as possible,” Ducey announced.

The video of Ducey’s shameful capitulation to Democrat vote riggers can be seen here:

Gov. Ducey (R-AZ) certifies Biden’s win in Arizona, and announces he will sign documents today so that Senator-elect Mark Kelly (D) can be sworn in “as swiftly as possible.”

(Kelly will be sworn in on Wednesday, per reports. The Senate will then be 52R-48D.) pic.twitter.com/UKwpws2wP3

Ducey even made a post on his Twitter account celebrating “the success of our election system,” which may be a tacit admission that he has been in on the steal all along:

Today, we signed the canvass for the 2020 election in Arizona. I’m grateful to the voters, the county election offices, the county recorders’ offices, & the poll workers across the state for their dedication to the success of our election system. @SecretaryHobbs @GeneralBrnovich pic.twitter.com/vdjhuQosZd

Big League Politics has reported about lawsuits that are active in Arizona disputing the vote-counting process in Maricopa County:

The Trump campaign, together with the RNC, filed a lawsuit Saturday evening which alleges that officials in Maricopa County, Arizona, incorrectly rejected numerous in-person votes.

The lawsuit claims that some voters using electronic machines were warned of a “facial irregularity” or “overvote” in their ballot, but that poll workers told them to “override the tabulator’s rejection of the ballot in the good faith belief that their vote would be duly registered and tabulated.”

However, “overriding the electronic tabulator’s alert automatically disqualifies the putative ‘overvotes’ without without additional review or adjudication,” the lawsuit stated.

The lawsuit continued: “While this safeguard was afforded to putative overvotes cast on early ballots and on Election Day ballots that poll workers properly segregated in a separate repository, potentially thousands of voters across Maricopa County have been disenfranchised by systematic improper tabulator overrides. Upon information and belief, the adjudication and tabulation of these ballots will prove determinative of the outcome of the election for President of the United States in Arizona and/or other contested offices in Maricopa County.”

Ducey, like Georgia Gov. Brian Kemp, has shown where he stands under the pressure. He has joined the color revolution coup against President Donald Trump and revealed himself as a modern-day Benedict Arnold at war with the U.S. Republic.