Big Tech is suppressing information about writ of quo warranto, the ‘Trump play’ 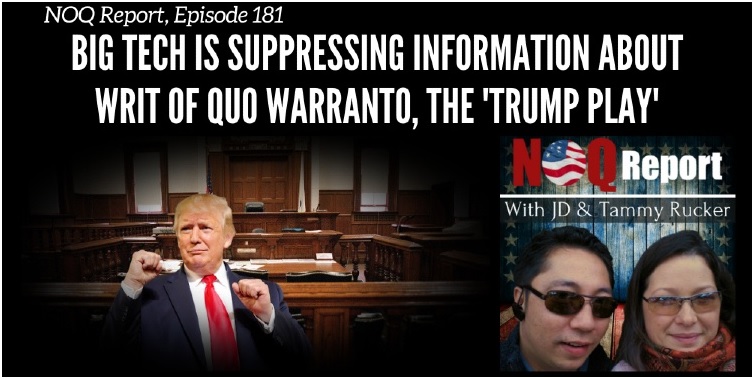 There are two major reasons President Trump should file a writ of quo warranto. One big reason it to attempt to remove Joe Biden and Kamala Harris from office. Perhaps that’s why Google, Facebook, Twitter, Spotify, and others are attempting to suppress information about it.

President Trump has a play he and his team can make to challenge the results of the 2020 election. It’s a longshot, but it doesn’t fall into the realm of shadow-government-military-coup or some of the other theories we’ve heard lately. This one is legitimate, legal, and does not require suspension of disbelief. It’s called a “writ of quo warranto,” something we’ve covered a couple of times on NOQ Report recently.

Unfortunately, unless you’re a regular reader of Leo Donofrio, 100percentfedup, or a handful of other websites, you’ve probably never heard of it. We’ve found a strong suppression of the facts and opinions surrounding this, a suppression that has hit close to home here. Google, after showing our original article on the first page for searches for the term, has removed the article altogether. Links of Facebook and Twitter were quickly censored. Now, Spotify and a pair of podcast hosts have dropped us inexplicably, coincidentally following the publication of our first podcast on the issue.

Are they worried? Probably not. Like I said, it’s a longshot. With a writ of quo warranto, Trump or other aggrieved parties can file with the Department of Justice in order to present evidence that Joe Biden and Kamala Harris do not have the authority to be in office. The predicate for this would be voter fraud corrupting the election, starting the dominos falling for what eventually led to the January 20 inauguration. Precedent shows that if accepted, it can be heard in the DC Circuit Court and potentially work its way up to the Supreme Court.

As Donofrio noted in a recent article, there’s another reason the Trump team should file before the coming impeachment trial in the Senate. If his writ is pending with the DoJ or in court, theoretically he cannot participate in an impeachment trial until the writ is resolved.

On the latest episode of NOQ Report, I dove deeper into the censorship surrounding a writ of quo warranto as well as the possibilities surrounding the action itself. Nobody outside of President Trump’s circle is aware of the plan going forward, but this would be a smart move from multiple angles.

What do they have to hide? Considering a writ of quo warranto is a longshot for President Trump, one would think it wouldn’t even be on Big Tech’s radar. It is, and that alone should get patriots digging deeper.

3 thoughts on “Big Tech is suppressing information about writ of quo warranto, the ‘Trump play’”