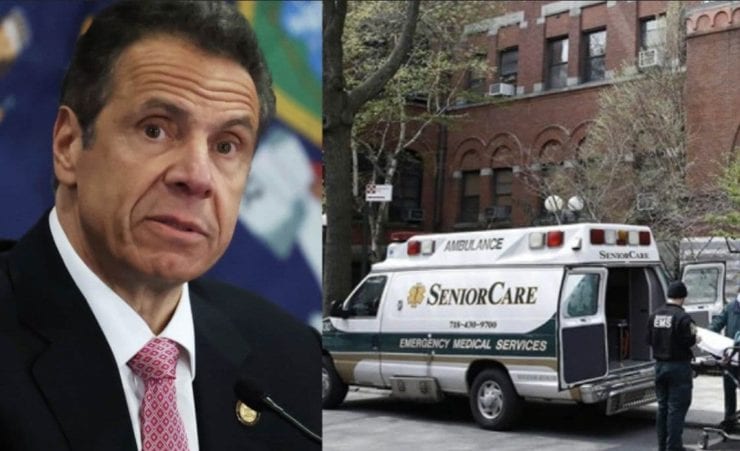 In May we reported that New York Mayor’s nursing homes were allowing Covid-positive workers to remain on the job as Cuomo stuffed the elderly into nursing homes to die alone without any family and then scrubbed it from the NY health website.  Death death tolls rose because the elderly were trapped inside death-box nursing homes without any recourse or family contact.  Back then, we all knew something was wrong with these–and other–NYC Covid policies.  But, instead of condemning this and investigating such atrocities, the media praised Cuomo and gave him an Emmy award.

Yes, governor Cuomo got an Emmy award for his portrayal of an mafioso mayor in NYC.  For those who do not know, an Emmy award is what actors get when they lie better than anyone else in the world for a living.

But, it wasn’t until now that we knew any long-term data.  And now that we do,  it is not good at all. None of the data we have been given may have been accurate, leaving many to reasonably believe that terrible things happened under terrible leadership and those who are privy to the latest knowledge now say major “fraud” occurred.

In a damning, 76-page report, James also said that some unidentified nursing homes apparently underreported resident fatalities to the state Department of Health and failed to enforce infection-control measures — with more than 20 currently under investigation.

The bombshell findings could push the current DOH tally of 8,711 deaths to more than 13,000, based on a survey of 62 nursing homes that found the state undercounted the fatalities there by an average of 56 percent.

The report further notes that at least 4,000 residents died after the state issued a controversial, March 25 Cuomo administration mandate for nursing homes to admit “medically stable” coronavirus patients — which James said “may have put residents at increased risk of harm in some facilities.”

Under Cuomos totalitarian inept and secretive leadership, New York  was devastated unnecessarily by Covid at an alarming rate:

“As the pandemic and our investigations continue, it is imperative that we understand why the residents of nursing homes in New York unnecessarily suffered at such an alarming rate,” James said.

“While we cannot bring back the individuals we lost to this crisis, this report seeks to offer transparency that the public deserves and to spur increased action to protect our most vulnerable residents.”

The people of New York are not pleased.  This includes advocacy groups for seniors, who believe the numbers to be completely fraudulent and insulting:

“Vivian Zayas — who founded the Voices for Seniors advocacy group after her mom, who lived in a Long Island nursing home, died of COVID-19 last year — said that “our jaws dropped” upon reading James’ report.

“The attorney general’s report shows that Cuomo’s book on his great leadership during the pandemic is a fraud,” she said.

But, don’t worry; Marxist mayor of New York, Bill DeBlasio promises to get to the bottom of this right away:

“Asked about the finding during a morning news conference, Mayor Bill de Blasio said, “We have to make sense of this. We have to get the full truth. … And we have to be honest about the numbers.”

“These are our loved ones that we lost,” de Blasio said.

“It’s someone’s grandma, it’s someone’s mother or father, aunt or uncle. This is families missing someone dear to them…Among all the other pain that we went through in 2020, this was arguably the worst part of it.””

New York City Mayor, Bill DeBlasio is most famous for continuing the progressive destruction of New York City after Giuliani had miraculously resurrected it from the mob, unhinged 1990s crime, and 9/11.  He is also notable for failing miserably in the 2020 Democrat primary despite spending like a Roman dictator, and devasating the NYC police department whos officers have fled in droves.  Just search his name on our site for an endless buffet of dark DeBlasio parables.

Thankfully, it is not just us paying attention to his mismanagement of the health of his constitutents.  Activists and watchdog groups are also now taking notice of Andrew Cuomo’s deadly failures and lies:

“Bill Hammond of the Empire Center, a government watchdog group that has sued the state DOH for access to its data on the deaths of all nursing home residents, called James’ report “independent confirmation of a lot of the concerns and criticisms that have been raised.”

“It highlights major discrepancies in the reporting on deaths and makes clear that state policy and oversight of nursing homes was at least one factor in the tragic loss of life,” he said.”