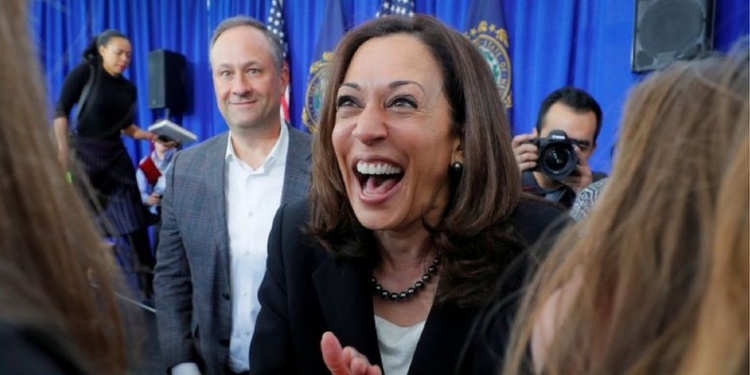 Many of us anticipated this. Now the plans are rolling out, perhaps and bit sooner than Democrats actually planned thanks to Joe Biden’s failing mental acuity.

Democrats want the nuclear launch codes. They’re angry that Joe Biden didn’t ask Kamala Harris for permission to bomb Syria. They pushed the State of the Union address over “security concerns.” It’s happening, folks. The bait-n-switch from President Biden to President Harris is underway, just like so many Trump-supporters warned for months.

The groundwork continues to be laid for Harris to supplant Biden as President of the United States. This has been the plan all along, but it seems like they’re accelerating their efforts. The likely reason is the fact that his cognitive skills continue to fade, perhaps more rapidly than they had hoped. He’s been showing signs of mental acuity challenges, potentially full-blown dementia, since a few weeks after he announced his candidacy in 2019. We witnessed him slip rapidly, particularly in the months following his nomination. Ever since Inauguration Day, he’s been limited in when he’s allowed to speak.

When he does actually speak, it’s almost always a total embarrassment.

Some have speculated his policies since taking office have been catered towards driving a wedge between him and his own Democratic base. Throughout Donald Trump’s presidency, we heard about “kids in cages” as illegal alien children were housed as best they could be. It was a carryover of an Obama-Biden policy, of course, but the left is wont to ignore history for the sake of political expediency. Now that migrant kids are back in migrant jails, the Democrats’ responses have been muted but present nonetheless.

Then, there’s Syria. This is the one that leads me to believe Biden himself may not be privy to the plans they have for him. He’s a hawk so it was easy to convince him that launching airstrikes against Syria was a good move. But if his advisers in the White House and Capitol Hill were really on his side, they probably would have recommended against it. After all, advancing our military presence in the Middle East and bombing a sovereign nation are policies both the left and the right can agree on as being bad.

I once thought Biden knew he was just a placeholder who could step down when it suited him, but now I believe he’s completely unaware that they’ve been planning to remove him all along. It’s not like he has the mental capacity to win a game of Hungry Hungry Hippos at this point, let alone understand the machinations of The Swamp or the Deep State that are working against him. The Syria move solidifies my opinion that he’s not just a useful idiot, but at this point he’s the most important useful idiot of all time.

The terrifying prospects of a Harris presidency have kept many concerned Americans up at night, and it appears that the foundation for such a move are being built. What are we to do? Is there a way to stop it? No, not really. Some are still holding out hope that Trump or the military or someone can swoop in and save us from this nightmare, but most have resolved to simply becoming the new resistance.

And therein lies the rub. Resistance against a Biden presidency that has most in mainstream media feeling lukewarm at best is fine, but what happens when media, Big Tech, and the thought-leaders of the progressive movement get behind President Harris? If we thought they were censoring us before, it’s guaranteed that speaking anything ill of President Harris will be met with claims of misogyny and racism. They will jam us with everything from the Saul Alinsky playbook, sprinkle in Neo-Marxist indoctrination tactics, and suppress dissenting views faster than they already are today.

As much as I hate to put most or all eggs in any speculative basket, this really does come down to circling the wagons behind Donald Trump. I’d love to say Gab and Parler can preserve our voice on social media, but I’m skeptical of their ability to be anything more than echo chambers. I’d love to see truthful and bold conservative news sites like NOQ Report, Gateway Pundit, and 100 Percent Fed Up continue to rise in prominence, but I’m concerned that our reach will be limited. And as much as I appreciate what One America News and Newsmax (usually) do to get the word out, they’re not really reaching critical mass in viewership. Our options are limited and rapidly diminishing. It will take someone with real-world clout to keep the truth afloat, which is why it’s imperative that Trump steps up.

If he’s not going to fight the election theft any longer, then he must engage with his supporters in a consolidated fashion. TrumpTV should replace Fox News as the go-to news channel. He should engage directly with rising publications (like [clears throat] NOQ Report) who truly support the MAGA agenda. He should either get going on Gab and/or Parler or he should get his own social network up as soon as possible. The fading of enthusiasm and the loss of hope among patriots are almost palpable. I get jumped on social media whenever I say that enthusiasm is dipping, but it’s true. We need some good news, quickly.

The theoretical Harris presidency is quickly becoming a foregone conclusion. We need to consolidate our resources and make moves in preparation. And Donald Trump must step in and lead the new resistance.