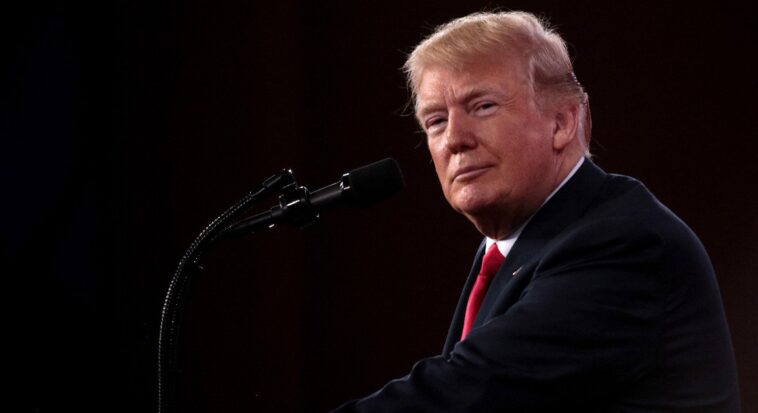 Donald Trump gave an interview on Fox News to Maria Bartiromo on Tuesday night. In the wide-ranging interview, Trump spoke out on the border crisis, the COVID pandemic, the Biden agenda, and more hard-hitting topics.

After Trump slammed Biden’s mishandling of the border crisis, Maria Bartiromo asked the 45th president give his take on the Biden agenda. Watch his response:

“Fortunately, in my administration, and through what I did, frankly, and others, but what I did with the FDA is I forced them to move quickly,” Trump added. “And we got the vaccine done in 9 months instead of five years. I don’t think it ever would have been done, frankly. Because according to their rules and regulations this would have never had it.”

“But we got a vaccine done in 9 months,” he continued. “And fortunately, that’s not only going to save our country, it’s going to save the world.”

Donald Trump also weighed in on Biden’s claim that he inherited the border crisis and the current White House’s lack of credit for the previous administration on the vaccine.

“And if you look at Biden, he didn’t want to do it months afterwards,” he continued. “And he admitted that he made a mistake in saying that. If I didn’t do that, we would have had hundreds of thousands of more lives gone.”

“But the big thing… and I’ve always felt it was the most important, is the vaccine,” Trump went on. “The key was always going to be the vaccine.”

“And when Biden got the vaccine in December,” Trump pointed out, “And on January 20th, he made a statement that he doesn’t think we have vaccines. Now, I don’t know, did he make that statement as the statement, or did he not actually know that we had the vaccine. What’s going on there? But he got his shot, his first shot in December…”

President Trump also recommended that Americans get the vaccines.

“I would,” Trump replied. “I would recommend it. And I would recommend it to a lot of people that don’t want to get it. And a lot of those people voted for me, frankly. But, you know, again, we have our freedoms. And we have to live by that. I agree with that, also.”