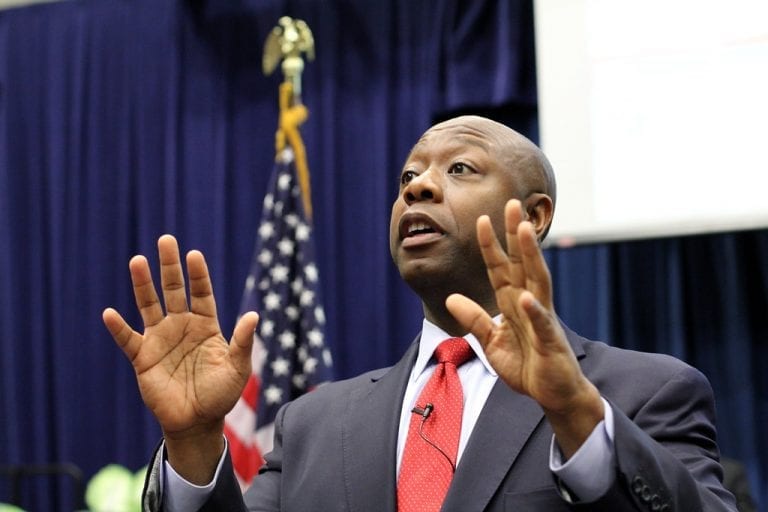 Did Donald Trump just drop his first hint about his 2024 running mate?

Most observers and pundits believe that if / when President Trump runs in 2024, he will NOT run with Mike Pence again.

After Pence appeared to betray Trump on January 6th…

After Pence showed his true colors…

And after Pence bowed to the liberal mob and refused to speak at CPAC, it’s hard to imagine the former vice president being tapped for the office again.

So who will Trump run with in 2024 (assuming he does indeed run again)?

It appears that Trump is signaling that he will run with Tim Scott.

Some of you may be thinking: an endorsement doesn’t mean anything. After all, Trump has endorsed a lot of people. So why would this endorsement be any different?

Bloomberg has a few details that could shed light on Trump’s thinking:

Donald Trump is telling allies he’s strongly considering another run for president in 2024 — and close advisers want him to choose someone other than former Vice President Mike Pence for his ticket, according to people familiar with the discussions.

Trump publicly teased at the Conservative Political Action Conference last Sunday that he’s mulling another bid for president. Privately, he’s discussed alternatives to Pence as he takes stock of who he believes stood with him at the end of his term and who didn’t, according to two of the people.

They requested anonymity because the conversations have been private.

Trump’s advisers have discussed identifying a Black or female running mate for his next run, and three of the people familiar with the matter said Pence likely won’t be on the ticket.

Two advisers have suggested Trump consider South Dakota Governor Kristi Noem, the people said. Donald Trump Jr. and his girlfriend, Kimberly Guilfoyle, are hosting a fundraiser for Noem on Friday at Trump’s Mar-a-Lago resort and home in Palm Beach. The former president is planning to make an appearance, people familiar with the matter said.

And on Tuesday, Trump issued a public endorsement for South Carolina Senator Tim Scott’s re-election. Scott is the only Black Republican in the U.S. Senate.

If Trump runs in 2024, it would be good for him to pick a female running mate or someone who can appeal to voters that he lost in 2020 and for Pence to break out on his own and partner with someone who shares his core conservative values but doesn’t put off voters in the way that Trump’s rhetoric did at times, said Alyssa Farah, a former communications director for Trump.

This endorsement should raise eyebrows.

Tim Scott isn’t up for reelection for another two years, so why endorse him now?

Furthermore, there are no real primary challengers to Tim Scott, so an endorsement is unnecessary and unneeded?

Is this a signal of things to come?

I really appreciate President Trump coming out early and strong in support of my good friend, @SenatorTimScott reelection.

Tim is one of the most talented people I have ever known. pic.twitter.com/p1fq0Fqp7s

Of course, not everyone in thinks Tim Scott would be a good pick.

Over at Revolver News, they write:

President Trump has delivered his first endorsement since his political reemergence at CPAC, backing Tim Scott’s Senate reelection. Scott’s race is still nearly two years away, he isn’t expected to face a major primary challenge, and the race itself is unlikely to be close unless Republicans are having a seriously bad year.

So why the big public endorsement now?

President Trump may see a team-up with Sen. Scott as his path back to the White House. Doubtless, his advisors tell him that this would appeal to non-white voters and moderate whites (by showing he is Not Racist), expand his coalition and give him the advantage over President Biden or (more likely) President Harris.

President Trump should ignore this advice. Senator Scott doesn’t deserve to be the Republican all-star he is treated as, and he absolutely doesn’t belong on a Republican presidential ticket.

As the party nominally opposed to affirmative action, it is unsurprising that the Republican Party practices it more aggressively than any other institution in America. Republicans are mostly white, and their leaders are mostly white men. Rather than realize there is nothing wrong with that, Republicans have accepted the left’s moral framing, and are desperate to elevate women, non-white, and gay figures as a way to “prove” the party is not bigoted.

This doesn’t mean in the slightest that all conservative women and minorities are overhyped tokens. South Dakota Governor Kristi Noem would deserve national praise for defying coronavirus insanity even if she were a man. Justice Clarence Thomas would be the finest constitutionalist on the Supreme Court right now no matter what his race.

Tim Scott isn’t an awful senator. He isn’t a stealthy open borders zealot, and he’s “conservative enough” on most big issues. Yet, once again, the question Donald Trump and every other Republican must ask themselves is this: Purely on the merits, does Tim Scott deserve the hype he’s gotten as the future of the party, or a potential Trump running mate? An honest look at his record shows the answer must be “No.” At critical moments, Scott has repeatedly abandoned conservatives and nationalists to hand victories to globalists and the left, sometimes with lethal consequences.

So what do you think?

Was this just an ordinary endorsement?

Or is this a preview of things to come?

Would you support a Trump / Scott ticket in 2024? Let us know in the comments section below!