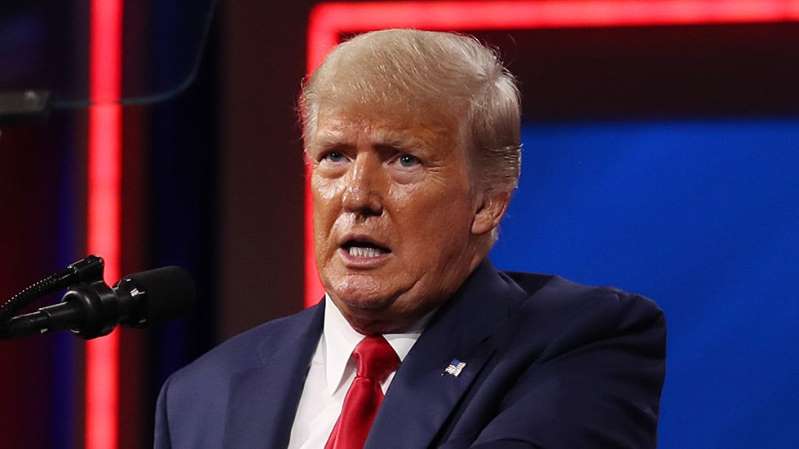 Trump: I Do Not Support RINOs And Fools

Trump just dropped another bomb on the GOP establishment.

Not only did he take on the establishment GOP but he doubled down promoting his own fundraising apparatus. Telling supporters to donate directly to the official President Trump donation site, www.donaldjtrump.com.

INBOX: New Trump Statment. “I fully support the Republican Party and important GOP Committees, but I do not support RINOs and fools, and it is not their right to use my likeness or image to raise funds…” More: pic.twitter.com/JRmluclhqi

Former President Trump doubled down on his calls for Republicans to donate to his leadership PAC rather than the GOP amid a growing feud over the party’s use of his name and likeness in its fundraising.

In a statement put out by Save America, Trump’s PAC, the former president berated “RINOs and fools” while maintaining he supports the Republican Party. It’s the latest escalation in the fundraising dispute that began over the weekend.

“I fully support the Republican Party and important GOP Committees, but I do not support RINOs and fools, and it is not their right to use my likeness or image to raise funds,” Trump said, using the acronym for “Republicans in name only.”

“So much money is being raised and completely wasted by people that do not have the GOP’s best interests in mind. If you donate to our Save America PAC at DonaldJTrump.com, you are helping the America First movement and doing it right. We will WIN, and we will WIN BIG! Our Country is being destroyed by the Democrats!” he added.

The statement was the latest indication that Trump has no intention of appeasing the Republican National Committee (RNC) after it brushed off a cease-and-desist letter from his lawyers demanding it stop referencing Trump in its fundraising and merchandising.

“President Trump will ALWAYS stand up for the American People, and I just thought of the perfect way for you to show that you support him!” one email from the RNC read. “As one of President Trump’s MOST LOYAL supporters, I think that YOU, deserve the great honor of adding your name to the Official Trump ‘Thank You’ Card.”

Since leaving office, Trump has set himself up to play the role of Republican kingmaker, backing lawmakers who supported his presidency while threatening to promote primary challenges against Republicans he deems insufficiently loyal. While Trump’s national approval rating has declined since he left office, his endorsement remains highly coveted by most Republicans running across the country.

However, Trump in part made his personal fortune off of leasing his name and has been protective in his public and private lives of how other individuals and bodies used his name to benefit other candidates.

Trump doubles down on calls to donate directly to him

The ongoing feud has sparked speculation that GOP infighting could hurt Republicans’ chances of winning back Congress in the midterms. The party needs to flip only five seats in the House and one seat in the Senate to win back both chambers.

The three Republican bodies appeared to try to lower the temperature with Trump after he released his Tuesday evening statement, indicating they are looking forward to working with the former president heading into the 2022 midterms.

“The RNC, NRSC and NRCC are grateful for President Trump’s support, both past and future,” RNC Chairwoman Ronna McDaniel, NRSC Chairman Sen. Rick Scott (R-Fla.) and NRCC Chairman Rep. Tom Emmer (R-Minn.) said in a joint statement. “Through his powerful agenda, we were able to break fundraising records and elect Republicans up and down the ballot. Together, we look forward to working with President Trump to retake our Congressional majorities and deliver results for the American people.”

Why does this matter?
This confirms what we have been telling you in previous reports. Trump supports the Republican party but not the RINOs within it. It is another signal that Trump is planning on taking on the establishment GOP and in a big way.

Another big deal here is that Trump is starting his own fundraising. He wants money sent to him at donaldjtrump.com which is a brilliant idea. If the money is sent to the GOP then they control where it goes. If the money is sent to him directly then he controls where it goes. This is what is needed to primary the RINOs who the GOP is still supporting.

-Trump will not be supporting RINOs

-Trump is using his own fundraising not the establishments