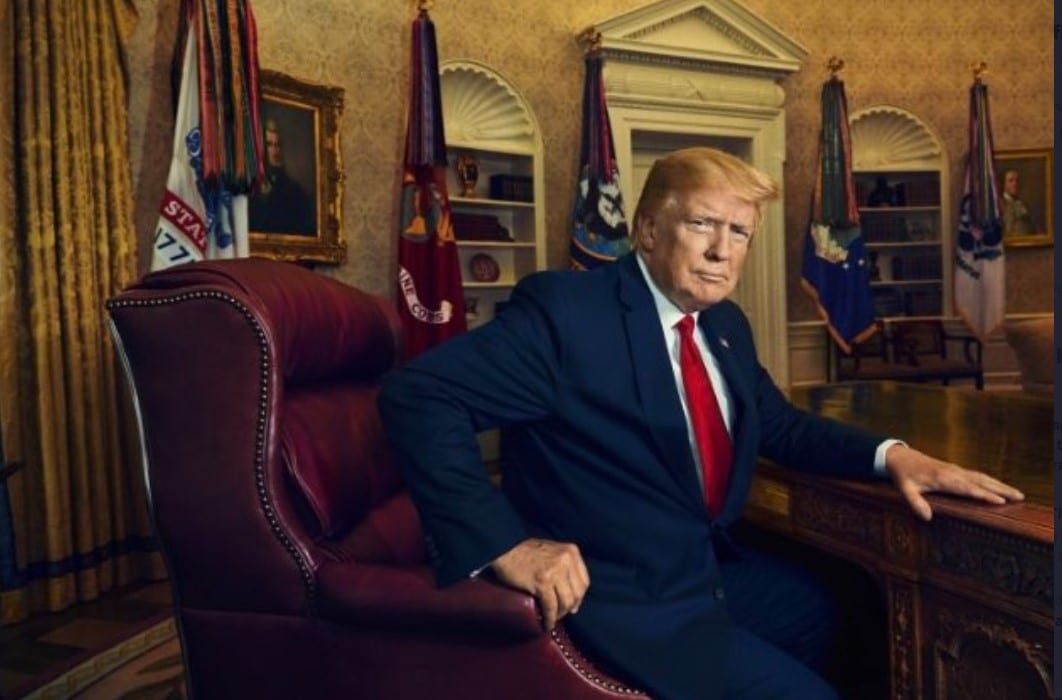 A portrait of former President Donald Trump — while not yet the official oil painting of him  —  will be on display in the America’s Presidents exhibition in the Smithsonian’s National Portrait Gallery in Washington D.C. when it reopens on May 14.

The portrait, a photograph by Pari Dukovic, shows Trump seated in the Oval Office behind the Resolute Desk, reports The Washington Post. It is taking the place of  Kehinde Wiley’s portrait of President Barack Obama in the exhibit.

The Obama painting, along with Amy Sherald’s painting of former first lady Michelle Obama, is heading out on a one-year, five-city tour. Meanwhile, Shepard Fairey’s “Hope” collage of Obama, acquired by the gallery in 2008, will replace the Wiley painting, the Post reports.

Trump’s portrait vs. the Obama portrait it will be replacing at the Smithsonian pic.twitter.com/6FOubbx2op

“There’s always a sense of transition when we install a new presidential portrait,” Dorothy Moss, the gallery’s curator of painting and sculpture, said of the new Trump exhibit. “We are a museum that reflects art history and biography, and we are able to celebrate the presidents with portraits that are historical documents.”

The museum has been closed since last November because of the coronavirus pandemic.

Dukovic shot Trump’s photograph on June 17, 2019, for Time Magazine, the day before he announced his reelection campaign. Leslie Urena, the museum’s curator of photographs, said it joins four other photos that predate Trump’s presidency.

Meanwhile, Trump’s official painting has not yet been completed, and Dukovic’s photograph will remain on display until the painting is acquired.

The museum has not shared details of that painting’s commission, nor on the portrait of former first lady Melania Trump, but said the process is underway. The Obama paintings were not acquired until 2018.

Dukovic is an award-winning photographer whose work includes portraits, news, sports, entertainment, and fashion, and his photograph of Obama is on the cover of the former president’s memoir “A Promised Land.”

Urena said the Trump portrait has a merit that is both artistic and historic.

“I like the composition of the photograph,” she said. “It is an angle we don’t often see. You get a little bit of the other side and what’s behind the desk.”

The details also include flags along the wall that represent the five branches of the armed forces, as well as portraits of Andrew Jackson and Benjamin Franklin that reflect Trump’s interests and influences said Urena.

The portrait was shot on the day before Trump announced his reelection campaign, adding to its historical value, Ureña said.

“We want to not only depict the individual,” she said, “but also bring as much history, as much context as possible.”

The wall text accompanying the photograph has a brief biography that details the president’s tenure and includes his achievements on record low unemployment, immigration, and the appointment of a record number of federal judges and three Supreme Court justices.

The documentation also notes his two impeachments and acquittals and wraps up by discussing how the coronavirus pandemic “resulted in a devastating loss of human lives and an economic crisis, became a key issue during his reelection campaign. More Americans voted in the 2020 presidential election than ever before, and the majority elected Joseph R. Biden Jr. Nevertheless, Trump did not concede, and a mob of his supporters, who refused to accept the results, attacked the U.S. Capitol complex on January 6, 2021, when Congress was working to certify Biden’s win.”

“We’re looking at the American presidency in its entirety. We do include critical comments, but we’re even in our assessments,” Moss said about the description. She pointed out that the reflections are written by museum curators and historian and is a “process of collaboration. A lot of people review it. There’s a lot of discussions.”