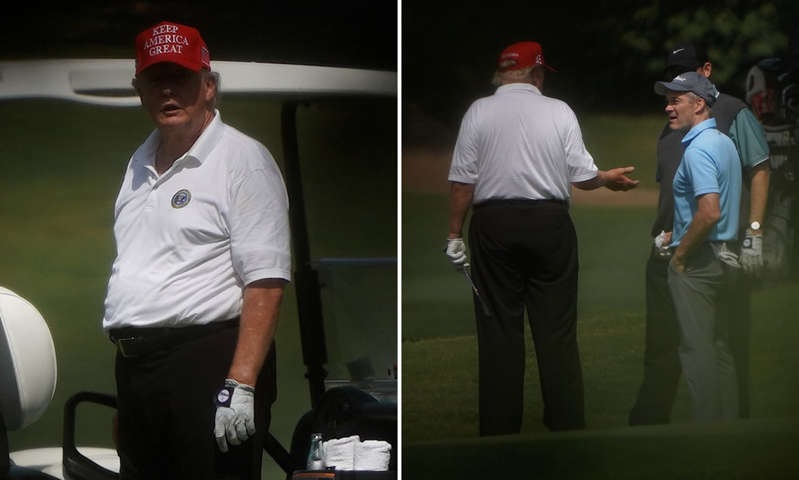 The two men were seen at Trump International in West Palm Beach, Florida on Sunday morning.

Democratic Rep. Demings on Tuesday told Jordan ‘you don’t know what the heck you are talking about’ after the pair clashed over police reform.

Her fellow Democrat Waters last week told Jordan to ‘shut his mouth’ when he asked Dr. Anthony Fauci when the pandemic will end and America will get their ‘liberties’ back.

In January, shortly before his presidency ended, Trump held a private ceremony awarding Ohio representative Jordan with the Presidential Medal of Freedom.

Lara posted a photo on Instagram on Saturday showing her arm-in-arm with Tiffany, 27, and Guilfoyle, 52 – a top official on the president’s 2020 campaign – at a resort in North Key Largo.

Demings, who served as chief of the Orlando Police Department for three years, got into a terse back-and-forth during a Judiciary hearing Tuesday with Jordan while discussing a bill that would prevent police departments from being defunded.

She accused Republicans of using law enforcement officials as pawns to advance their political agenda.

‘I want to make it quite clear that this amendment is completely irrelevant,’ Demings said.

‘I served as a law enforcement officer for 27 years. It is a tough job,’ she continued. ‘And good police officers deserve your support.’

‘You know, it’s interesting to see my colleagues on the other side of the aisle support the police when it is politically convenient to do so. Law enforcement officers risk their lives every day. They deserve better, And the American people deserve better –’ the Florida Democrat said before Jordan sought to interject.

Instead, the Ohio Republican was met with a fiery rebuttal from Demings, who pounded hand against the desk in front of her as she exclaimed: ‘I have the floor Mr. Jordan.’

‘Did I strike a nerve?’ Demings shouted as she looked in the Ohio Republican’s direction. ‘Law enforcement officers deserve better than to be utilized as pawns. And you and your colleagues should be ashamed of yourselves.’

Jordan said he agreed with Nadler that members shouldn’t shout out of turn, and Demings shot back: ‘Mr. Jordan you don’t know what the heck you’re talking about. You know nothing about what law enforcement officers are.’

The hearing happened Tuesday while the jury in the trial against former Officer Derek Chauvin deliberated – and later that day found him guilty on all three charges of 2nd degree murder, 3rd degree murder and manslaughter in the killing of George Floyd during an arrest last May.

The tense interaction between Jordan and Demings came after a similar exchange earlier this month involving Jordan.

The Ohio representative got into it with California Representative Maxine Waters during his questioning of Dr. Anthony Fauci during a House subcommittee meeting earlier this month.

When Jordan interrupted Fauci to ask for clarification on when Americans would regain ‘liberties’ stripped during the coronavirus pandemic, Waters told the congressman, ‘Shut your mouth.’

Staunch Trump supporter Jordan remained one of the president’s biggest allies as he went forward with challenging the Electoral College results after a pro-Trump mob stormed the Capitol.

He was also one of Trump’s most staunch defenders during impeachment hearings.

Jordan signed a letter demanding Congress investigate the integrity of the presidential election after Trump sought to overturn the results.

Trump officially moved his residency for tax purposes from New York to Florida in late 2019.

As president, he spent a significant amount of time during the winter in Florida, and during the summer he would escape Washington for New Jersey, staying at his Bedminster golf club.