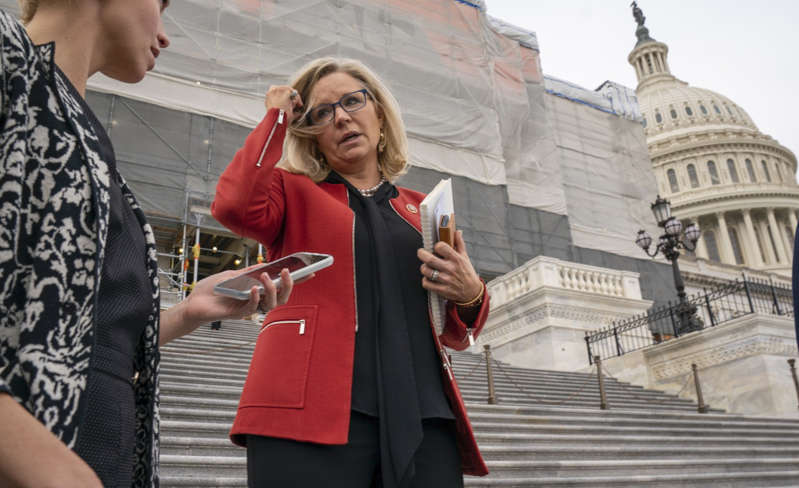 His pronouncement, seen in his latest tweemail, follows the Wyoming congresswoman’s public break from House Minority Leader Kevin McCarthy, in which she asserted that a proposed commission to investigate the Jan. 6 U.S. Capitol riot should focus on the events of that day and not on violence from other groups.

“Liz Cheney is polling sooo low in Wyoming, and has sooo little support, even from the Wyoming Republican Party, that she is looking for a way out of her Congressional race,” Trump said Tuesday. “Based on all polling, there is no way she can win. She’ll either be yet another lobbyist or maybe embarrass her family by running for President, in order to save face.”

Trump added in the statement, “This warmongering fool wants to stay in the Middle East and Afghanistan for another 19 years, but doesn’t consider the big picture — Russia and China!”

Cheney, the daughter of former Vice President Dick Cheney, was one of 10 House Republicans who voted to impeach Trump on a charge of incitement of insurrection in connection to the Capitol riot. He was later acquitted by the Senate. Cheney has since been subject to criticism from members of her own party, including some who argue she should be expelled from her position as the House Republican conference chairwoman, but she kept her spot after a majority of House Republicans voted in support of her.

“What happened on Jan. 6 is unprecedented in our history, and I think that it’s very important that the commission be able to focus on that,” she told reporters in Orlando, Florida, on Monday, according to multiple news outlets. “It’s very important that the Jan. 6 commission focus on what happened on Jan. 6 and what led to that.”

That’s different from what McCarthy, a California Republican, suggested should be in such an inquiry.

“I think there’s a lot of things that happened,” McCarthy said during a briefing on Thursday. “It’s not just on Jan. 6. We had, on Good Friday, an officer get killed. I think if you’re going to have a commission, you should look at the whole broad spectrum. We just went through a whole summer of riots throughout the city. We should grasp that as well.”

The Washington Examiner reached out to Cheney’s office for comment but did not immediately hear back.