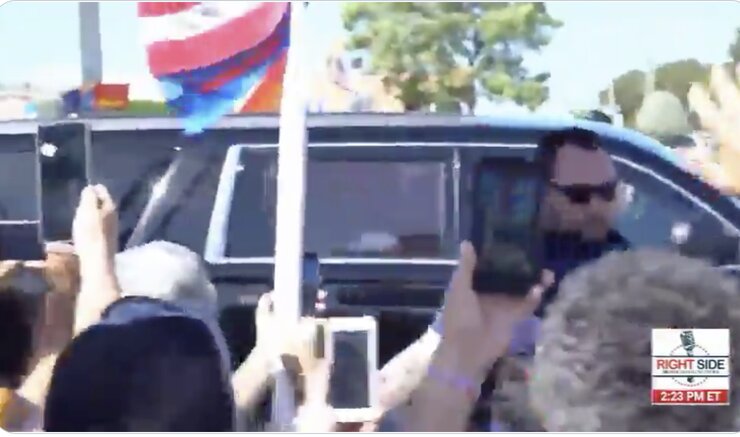 Riding in a black SUV, the former president drove slowly through the cheering crowd, protected by members of the Secret Service.

Supporters waved Trump flags and American flags, chanting “USA!” as Trump’s familiar shock of blond hair was spotted in the window of the vehicle.

The pair of SUVs drove slowly through the crowd before continuing on down the highway. Police were spotted at the event to control the crowds.

Hundreds of Trump supporters joined the rally about a mile west of Mar-a-Lago to celebrate Presidents’ Day and the former president of the United States.

Right Side Broadcasting Network was present for the event and streamed it live.

Fans of the former president continue to show their affection.

On Sunday, a woman from San Antonio, Texas spent more than $1,000 to have a plane fly over Mar-a-Lago with the message, “We love you Prez Trump. Happy Valentine’s Day.”

On Monday, another message for Trump flew by that read, “We ❤️ Trump! The Best is Yet to Come.”

“USA! USA! USA!”, the crowd chanted as the 45th President drove by.

As we mentioned earlier on TrendingPolitics.com, President Trump doesn’t appear to be going anywhere when it comes to the world of politics.

During an interview on Sunday, Republican Senator Lindsey Graham said that former President Donald Trump was excited to get back into the world of politics and “hit the trail” after the Senate voted to acquit him over the weekend.

“He’s ready to move on and rebuild the Republican Party and is excited about 2022,” Graham said on “Fox News Sunday.”

“We need to unite the party. ‘Trump plus’ is the way back in 2022,” he said. “Donald Trump is the most vibrant member of the Republican Party.”

Graham also revealed that he had talked to the former President after the acquittal. “I said, ‘Mr. President, this MAGA movement needs to continue.’” Graham said, adding he plans on golfing with President Trump in Florida next week.