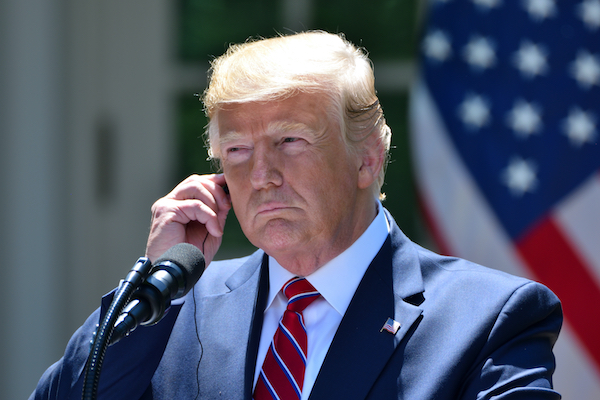 On Friday, Facebook and Instagram restored the accounts belonging to President Donald Trump after they temporarily banned him last week.

The decision to reinstate his account came as a surprise to many considering the President was banned from not only Facebook and Instagram last week, but from Snapchat, Twitter, Shopify, Twitch and other websites for selling Trump merchandise.

One of the oddities from the President’s Facebook account is that his classification says “Political candidate.” We have not been able to confirm if this is what the classification was before the ban took place.

Facebook has been met with harsh backlash from conservatives and other world leaders after they temporarily banned President Trump from their platform.

On Thursday, Mexican President Andrés Manuel López Obrador promised to take on tech giants after they conducted a disgusting attack on free speech against President Donald Trump and his supporters.

“I can tell you that at the first G20 meeting we have, I am going to make a proposal on this issue,” López Obrador said. “Yes, social media should not be used to incite violence and all that, but this cannot be used as a pretext to suspend freedom of expression.”

“How can a company act as if it was all powerful, omnipotent, as a sort of Spanish Inquisition on what is expressed?” López Obrador questioned.

“Given that Mexico, through our president, has spoken out, we immediately made contact with others who think the same,” Ebrard stated. “The president’s orders are to make contact with all of them, share this concern and work on coming up with a joint proposal. We will see what is proposed.”

“I don’t like anybody being censored or taking away from the right to post a message on Twitter or Face(book). I don’t agree with that, I don’t accept that,” López Obrador said. “How can you censor someone: ‘Let’s see, I, as the judge of the Holy Inquisition, will punish you because I think what you’re saying is harmful.’ Where is the law, where is the regulation, what are the norms? This is an issue of government, this is not an issue for private companies.”

Junior Minister for European Union Affairs Clement Beaune said he was “shocked” to see a private company make such an important decision. “This should be decided by citizens, not by a CEO,” he told Bloomberg TV on Monday. “There needs to be public regulation of big online platforms.” Finance Minister Bruno Le Maire earlier said that the state should be responsible for regulations, rather than “the digital oligarchy,” and called big tech “one of the threats” to democracy.

Spokesperson for German Chancellor Angela Merkel also spoke out, saying, “The right to freedom of opinion is of fundamental importance. Given that, the chancellor considers it problematic that the president’s accounts have been permanently suspended.”

“In my opinion, the decision to ban Trump was based on emotions and personal political preferences. Don’t tell me he was banned for violating Twitter rules. I get death threats here every day for many years, and Twitter doesn’t ban anyone,” Navalny said. “Among the people who have Twitter accounts are cold-blooded murderers (Putin or Maduro) and liars and thieves (Medvedev). For many years, Twitter, Facebook and Instagram have been used as a base for Putin’s ‘troll factory’ and similar groups from other authoritarian countries.”

“Of course, Twitter is a private company, but we have seen many examples in Russian and China of such private companies becoming the state’s best friends and the enablers when it comes to censorship,” Navalny added. “If you replace ‘Trump’ with ‘Navalny’ in today’s discussion, you will get an 80% accurate Kremlin’s answer as to why my name can’t be mentioned on Russian TV and I shouldn’t be allowed to participate in any elections.”

“This precedent will be exploited by the enemies of freedom of speech around the world. In Russia as well. Every time when they need to silence someone, they will say: ‘this is just common practice, even Trump got blocked on Twitter,’” Navalny finished. “If @twitter and @jack want to do things right, they need to create some sort of a committee that can make such decisions. We need to know the names of the members of this committee, understand how it works, how its members vote and how we can appeal against their decisions.”