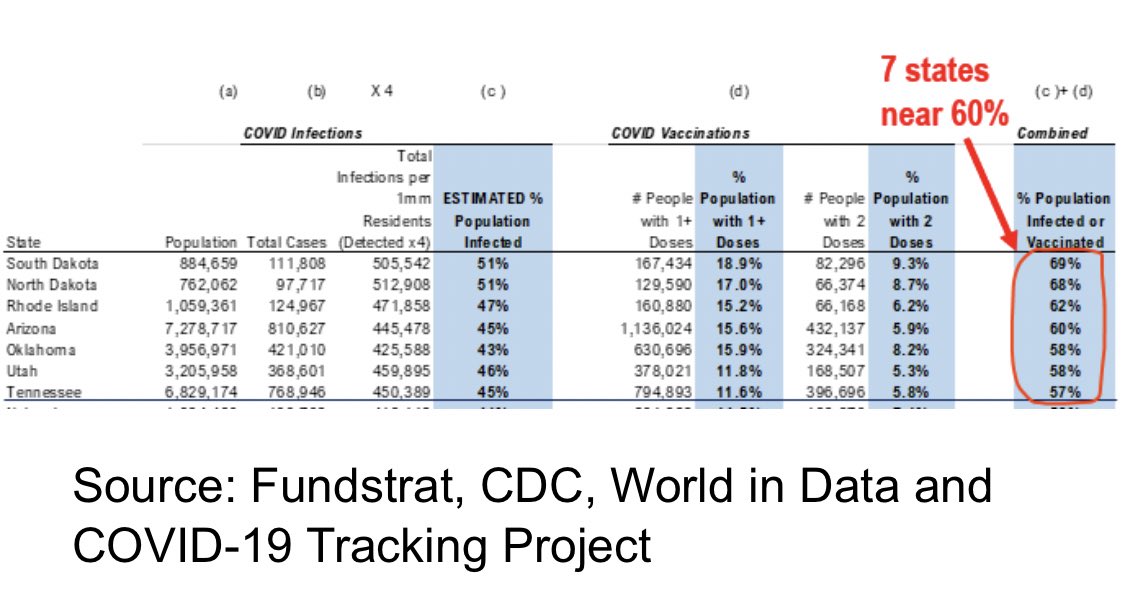 Despite gloom promulgated by President Joe Biden that the nation has to suffer through a “dark winter” due to the rampaging ravage of COVID-19, new data says that weeks from spring the picture is already changing.

CNBC host Carl Quintanilla posted on Twitter on Friday a snapshot of results from a nationwide study showing which states are getting closer to achieving herd immunity.

“.. cumulatively and slowly, the US is seeing more states reach that combined level of vaccinations + infections approach what is seen as herd immunity,” Quintanilla quoted, referencing a study by Fundstrat along with data from the COVID Tracking Project and the Centers for Disease Control and Prevention.

Fundstrat has been keeping tabs on the total number of people in each state who have both had the coronavirus and been vaccinated against it, on the grounds that once 60 percent of a state’s population has either had the virus or taken the vaccine, that state has reached herd immunity — the level where a disease does not spread easily because so many people in the group are immune.

Although the CDC has not laid out a definitive number regarding herd immunity, common thresholds for infectious diseases range from 50 percent to 90 percent, depending on how contagious the disease is, according to a report from Gypsyamber D’Souza and David Dowdy at the Johns Hopkins Bloomberg School of Public Health.

According to the data, 69 percent of South Dakota’s population has either gotten the vaccine or contracted the virus. In second was North Dakota at 68 percent, followed by Rhode Island at 62 percent and Arizona at 60 percent.

Nearing 60 percent as well were Oklahoma and Utah, at 58 percent, followed by Tennessee, at 57 percent.

Previously on Feb. 17, Quintanilla also posted numbers showing that Nebraska was at 51 percent while Wisconsin and Indiana were at 50 percent. Mississippi, Wyoming and Kansas were just below 50 percent at the time.

Nationally, some commentators believe herd immunity will arrive this spring.

Dr. Suzanne Judd, an epidemiologist in the School of Public Health at the University of Alabama at Birmingham, is betting on May, using a figure of 72 percent to achieve herd immunity.

The arrival of herd immunity will mean “cases decrease without social intervention, which might be what we are starting to see right now,” Judd said in a research article posted on the university’s website.

“We are seeing sharp declines in the hospitalization ratio in the last month and a half, likely driven by monoclonal antibody therapy, but possibly also driven by the vaccine,” Judd said. “If people are vaccinated and still become infected, the case may be milder than it would have been if they were not vaccinated, which leads to lower hospitalizations.”

Judd said she believes the disease will not vanish completely, however.

“I think that COVID-19 is going to be endemic in the United States,” Judd said. “It is going to be like the seasonal flu, something we have to tolerate regularly. There will be isolated outbreaks, and they will likely occur in populations with lower immunity. This means that, just like the flu, a strong vaccination campaign will be needed to keep people out of the hospital.”

In a Feb. 18 Op-Ed written for The Wall Street Journal, Dr. Marty Makary, a professor at the Johns Hopkins School of Medicine and Bloomberg School of Public Health, said a combination of immunity from past infections and vaccinations means the U.S. is rapidly reaching herd immunity.

“Cases are down 77% over the past six weeks,” he wrote. “If a medication slashed cases by 77%, we’d call it a miracle pill. Why is the number of cases plummeting much faster than experts predicted?”

“In large part because natural immunity from prior infection is far more common than can be measured by testing. Testing has been capturing only from 10% to 25% of infections, depending on when during the pandemic someone got the virus. Applying a time-weighted case capture average of 1 in 6.5 to the cumulative 28 million confirmed cases would mean about 55% of Americans have natural immunity.”

“Now add people getting vaccinated. As of this week, 15% of Americans have received the vaccine, and the figure is rising fast. Former Food and Drug Commissioner Scott Gottlieb estimates 250 million doses will have been delivered to some 150 million people by the end of March,” Makary continued.

“There is reason to think the country is racing toward an extremely low level of infection. As more people have been infected, most of whom have mild or no symptoms, there are fewer Americans left to be infected. At the current trajectory, I expect Covid will be mostly gone by April, allowing Americans to resume normal life.”

Jul 18, 2021
We use cookies on our website to give you the most relevant experience by remembering your preferences and repeat visits. By clicking “Accept”, you consent to the use of ALL the cookies.
Do not sell my personal information.
Cookie settingsACCEPT
Manage consent