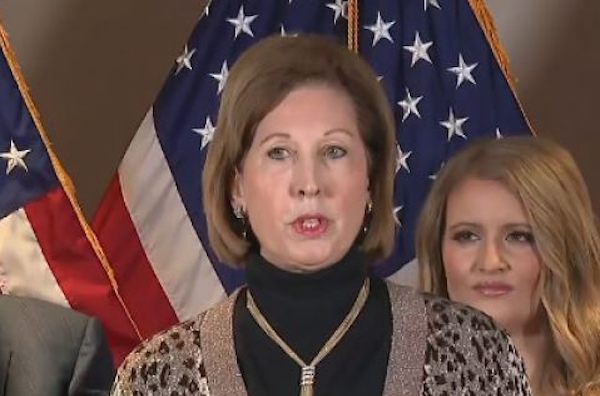 According to new revelations, Trump ally and attorney Sidney Powell’s case against the state of Michigan has officially made it to the Supreme Court docket.

A week and a half ago, an Obama-appointed judge in Michigan dismissed Powell’s case against the state, claiming it was “An Amalgamation of Theories, Conjecture, and Speculation”:

Now, it appears that the case has made it to the SCOTUS docket.

“It contains the forensic audit done in Michigan that proves systemic voter fraud occurred through the Dominion Voting System tabulation,” the Twitter account added.
It also has proof of at least 200,000 FRAUDULANT VOTES casted in the election.”

Powell has been on the offensive since the 2020 election and is making it clear that she will not be giving up anytime soon. On Friday evening, Powell announced that she was making emergency filings in the states of Georgia, Michigan, Arizona and Wisconsin.

The announcement from Powell came just hours after the Supreme Court shot down Texas’s lawsuit where they attempted to block the certification of the 2020 election results.

“Pay attention!” Powell tweeted. “We made emergency filings in #SupremeCourt tonight for #Georgia & #Michigan. Will be filing #Arizona #Wisconsin shortly. These cases raise constitutional issues and prove massive #fraud. Our plaintiffs have #standing #WeThePeople will not allow #rigged elections.”

Pay attention! We made emergency filings in #SupremeCourt tonight for #Georgia & #Michigan. Will be filing #Arizona #Wisconsin shortly. These cases raise constitutional issues and prove massive #fraud.
Our plaintiffs have #standing #WeThePeople will not allow #rigged elections https://t.co/AfvQ3h40u0

At the same time as Powell, President Trump’s team simultaneously filed an emergency appeal to the Supreme Court in Georgia.

Trump’s attorneys corrected that on Monday – the same day state officials recertified the election results following a third tally of votes. The vote showed Biden won Georgia by 11,779 votes out of some 5 million ballots cast.

With the certification done, Trump’s campaign withdrew an emergency motion for a temporary restraining order to prevent the certification. With the emergency motion withdrawn, Fulton County Judge Constance Russell issued an order Wednesday stating the lawsuit would proceed “in the normal course” – which means it will not be resolved any time soon.

On Friday, Trump’s campaign appealed to the Georgia Supreme Court.

The appeal says Russell is not qualified to judge an election case under state law because she is a resident of Fulton County and an active judge – not a judge on senior status. Because of that and other miscues it says occurred at the county court, the appeal asks the Supreme Court to rule on the merits of its case before Monday.

6 thoughts on “Huge Update Surrounding Sidney Powell Case, Has Allegedly Made it to Supreme Court Docket”