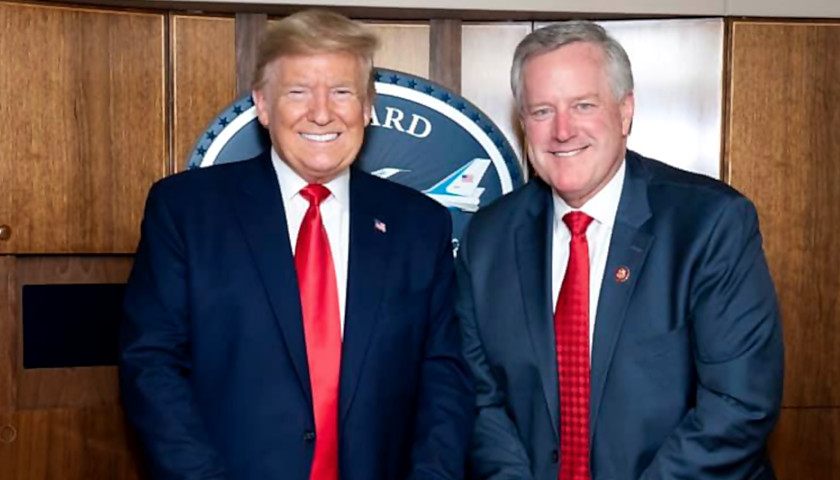 President Donald Trump’s former chief of staff, Mark Meadows, says a major move could be happening in the future.

During an interview on Sebastion Gorka’s radio show, Meadows said there’s a “50-50 chance” that Trump runs for office again.

“I’m feeling great about President Trump’s willingness to serve once again in the Oval Office,” Meadows told Gorka, another alumnus of the Trump White House.

Meadows didn’t get into specifics, but he did say Trump is “making all the preparations necessary” for another run, and he’s “being encouraged by his friends and former staffers.”

“Ultimately, what I think you will see is a vision for America that didn’t stop on Nov. 3, didn’t stop on Jan. 20, and we need to reengage,” Meadows said, referring to the dates of the 2020 election and Inauguration Day.

“So he’s getting major encouragement, and I would say this: I would put the odds at better than 50-50 that he runs again, and everybody should take note of that,” he continued.

Meadows is a former U.S. congressman from North Carolina who left his seat to become White House chief of staff in March 2020 and stayed on until Trump left office.

Meadows later joined the Conservative Partnership Institute as a senior partner, which he called a “networking hub for conservative causes.”

Donald Trump has been very active in politics in recent weeks — and he just made another interesting move.

Amid rumors swirling he’s considering running for president in 2024, Trump has hired Susie Wiles, a veteran political organizer, to help with his political operations.

“She is in a position of influence right now,” said one Trump adviser. “The question is: What direction does Susie take the organization?”

Wiles was hired last week and is a veteran political organizer, with a resume including involvement in Trump’s 2016 campaign, Insider reported. Wiles reportedly ran the Trump campaign’s battleground state operations during 2016.

Wiles previously discussed how data and voter outreach helped Trump win Florida in the 2020 election, according to WJCT. In a three-page memo, Wiles emphasized communicating with voters from 2016 as well as contacting “non-traditional Republican voter groups” as part of their victory strategy in the state, according to WJCT.

In a memo, Wiles wrote: “Focusing on the Trump voter from 2016 was a priority. Often these voters were not members of a Republican Club – sometimes not Republicans – and not drawn to GOP ideology but rather to President Trump as a brand. Re-engaging them was important and proved critical to GOTV (get-out-the-vote) and voter contact efforts.”

Trump adviser Jason Miller explained, “Susie has been a great teammate for two successful presidential campaigns in Florida and we’re glad to have her join the all-stars already assembled. Watch out 2022!”

Trump also made a huge announcement about his future.

In an interview with Lara Trump, his daughter-in-law who is now a Fox News contributor, Trump strongly suggested that he may run for president in 2024.

Trump also slammed Biden’s first few months in office and was asked to react to the current president’s initial press briefing after 65 days.