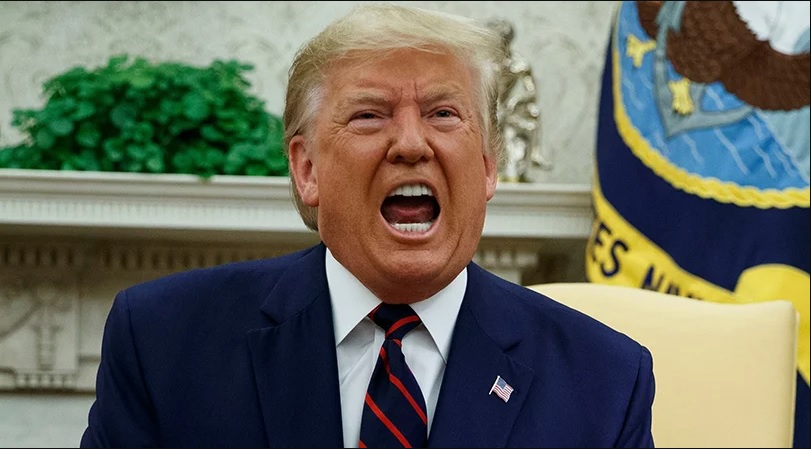 Donald Trump is far from done and he still has a ton of vitriol left for the Republicans who he believes abandoned and betrayed him.

The 45th President of the United States spoke at a Spring donor retreat on Saturday and laced into many, including Dr. Anthony Fauci, and saved his most scathing comments for “dumb son of a b**ch” Senate Minority Leader Mitch McConnell., The Washington Post reported.

The event was a Republican National Committee get together held at his Mar-a-Lago Club in Palm Beach, Fla., where he railed against those who voted to convict him in his impeachment trial and Kentucky Sen. McConnell who allowed the certifying of the 2020 presidential election to happen.

“If that were Schumer instead of this dumb son of a b**ch Mitch McConnell they would never allow it to happen. They would have fought it,” Trump said of the Jan. 6 certification.

“I hired his wife. Did he ever say thank you?” he said of Elaine Chao, who he then mocked for her resignation following the riots that happened in the Capitol on Jan.6. “She suffered so greatly,” he said sarcastically before calling McConnell a “stone cold loser.”

He said he still likes Mike Pence, who served as his vice president, but stressed that he was “disappointed” in him.

“I wish that Mike Pence had the courage to send it back to the legislatures … I like him so much. I was so disappointed,” he said.

But he is definitely not a fan of Dr. Anthony Fauci, of who he said, “Have you ever seen anybody that is so full of crap?”

Donald Trump Goes Off On His Enemies, including ‘Dumb Son Of A B**ch’ Mitch McConnell

He saved much of his vitriol for Senator Mitch McConnell, the minority leader, calling him a “dumb son of a bitch” and a “stone cold loser,’’ according to the attendee. A “real leader,” he said, would never have accepted the results of that election.

Late in his remarks, Mr. Trump praised the crowd that attended his rally on Jan. 6, admiring how large it was, the attendee said. Mr. Trump added that he wasn’t “talking about the people that went to the Capitol,” though hundreds of the rally attendees left the rally at the Ellipse to go to the Capitol.

Among other things, Mr. Trump is considering running again in 2024. Though few of his allies believe he will follow through, his presence could have a chilling effect on other potential candidates.

“The party is still very much revolving around” Trump, Manhattan Republican Party chairwoman and donor Andrea Catsimatidis, who attended the event, said. “He was the one who very much revived the party when we weren’t winning.”

But there are still some Republicans and Republican donors who want to rid the party of Trump.

“It is very important the Republican Party puts Donald Trump as far into the past as possible,” Republican donor William Oberndorf, a wealthy California investor who has given millions to Republican candidates, but who has vowed to now only donate to candidates who voted to impeach Trump, said.

“However, if Joe Biden does not ensure that major pieces of legislation have bipartisan support, it is he who will bear more responsibility than any group of Republican donors ever could for resurrecting Mr. Trump’s political future and fortunes,” he said.

2 thoughts on “Donald Trump Goes Off On Enemies, ‘Dumb Son Of A B**ch’ Mitch McConnell”