McConnell: I Would Support Trump If He Was The 2024 Republican Nominee… 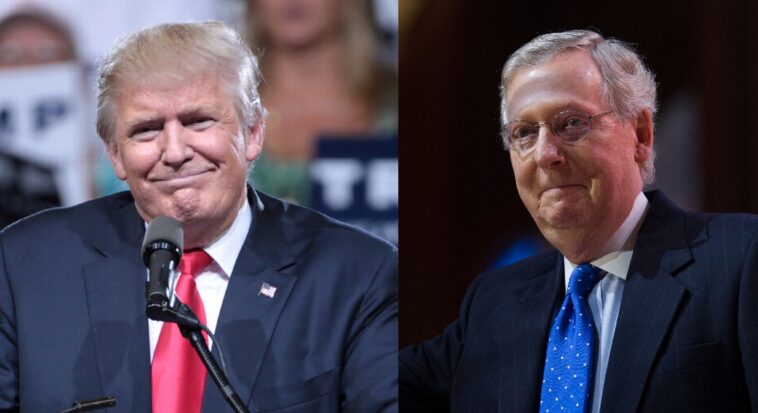 Senate Minority Leader Mitch McConnell appears to have had a change of heart since his unforgettable speech at the Senate impeachment trial. In his speech, he all but blamed Trump for the Capitol building attack, yet gave an excuse for voting to acquit: He is now a private citizen.

At the speech, McConnell even suggested that Donald Trump could be held “liable” for that Capitol riots fallout, whatever that meant. Donald Trump fired back with a fiery statement that pulled no punches:

“McConnell’s dedication to business as usual, status quo policies, together with his lack of political insight, wisdom, skill, and pesonality, has rapidly driven him from Majority Leader to Minority Leader, and it will only get worse,” Trump continued. “The Democrats and Chuck Schumer play McConnell like a fiddle — they never had it so good — and they want to keep it that way!”

Then there was this gem:

“Mitch is a dour, sullen, and unsmiling political hack, and if Republican Senators are going to stay with him, they will not win again. He will never do what needs to be done, or what is right for our Country. Where necessary and appropriate, I will back primary rivals who espouse Making America Great Again and our policy of America First. We want brilliant, strong, thoughtful and compassionate leadership,” he continued.

McConnell appears to have taken this in stride, as he has likely read the public opinion on the future of the Republican Party without Trump. McConnell just gave a previously unimaginable statement on whether he would back Donald Trump if he ran for president again.

“Mitch McConnell just said on Fox News that if Donald Trump is the GOP presidential nominee in 2024 then he will support him,” the Washington Post’s Chief Washington Correspondent reported. It has been confirmed by widespread reports.

McConnell tells Fox’s @BretBaier he would support Donald Trump if he was the 2024 Republican nominee pic.twitter.com/BS14OyXZ41

A recent Suffolk/USA Today poll showed that 76 percent of Trump supporters would vote for him again in 2024. McConnell may be a consummate politician, but he is not a stupid one.

It was recently reported that Donald Trump is ready to go to “war” with the Republican Party.

Multiple reports from senior advisers and members of Trump’s inner circle indicated that the former president is done playing “nice” with the GOP establishment.

It looks like that was enough to send an unmistakable message to the Beltway types: If you ever want to return to power, now is not the time to divide the Republican Party. If the voters decide to nominate Donald Trump in 2024, it would be a very wise decision to listen to them.

Donald Trump Says He Is Strongly Looking At 2024. Says 2020 Election Still Being Looked Into..

2 thoughts on “McConnell: I Would Support Trump If He Was The 2024 Republican Nominee…”