“Never Will I Concede,” Trump Tells Glenn Beck The Fight is Not Up 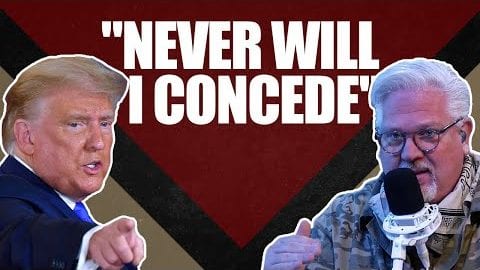 Despite this fact, the media, democrats, and some republicans refuse to acknowledge the truth.

Joe Biden and the democrats have stolen this election, and are primed to get away with it.

We cannot give them an inch.

This is our country, and there is no quit in the hearts of true Americans.

President Trump is a true American.

According to Glenn beck, President Trump told him personally, and in no uncertain terms:

“Never will I concede.”

The Blaze reported the story:

Over the holidays, Glenn Beck spoke with President Donald Trump over the phone, and the president made it clear that he has no intention of conceding the election (even if he has to leave the White House) because he believes — and always will believe — he won the race.

“He said, ‘The fight is not up,’ ” Glenn said of the president. “I mean, the guy is not done fighting. And he said, ‘I will not concede. Never will I concede.'”

The president is not alone in this fight.

Many Americans hear him, and we agree.

Honest Americans will NEVER concede to a Rigged Presidential Election!

President Trump should never “EVER” concede this election!

We the People will Never Concede!

Trump should never concede……
but Biden should.

President Donald Trump is not fighting for himself.

President Trump has not changed his tone at all since this all began.

As NPR reported back in November, Trump has maintained that Joe Biden did not win this election, therefore he will not concede.

President Trump this week acknowledged that the transition for President-elect Joe Biden to take office is going ahead. But on Thursday, he made clear he’s in no mood to concede the election, even after the Electoral College formally votes this month.

“It’s going to be a very hard thing to concede because we know there was massive fraud,” Trump said, without evidence, complaining that the U.S. election was “like a Third World country.”

Trump has kept a low profile since losing the election to Biden on Nov 3, appearing on camera only a handful of times, and steering clear of reporters’ questions.

But on Thanksgiving, after talking to troops serving overseas, Trump held forth, venturing into the weeds of the allegations that the election was rigged — baseless claims of widespread fraud that courts have repeatedly rejected.

“There’s no way that Biden got 80 million votes,” he said, repeatedly.

The battle for the soul of our country takes place on January 6th.

See you in Washington, DC, on January 6th. Don’t miss it. Information to follow!

Our wonderful President Trump, will never concede. He is tireless, he is our fighter, he was sent by God to take care of all this DC corruption. https://t.co/L5eOMXrapF

5 thoughts on ““Never Will I Concede,” Trump Tells Glenn Beck The Fight is Not Up”