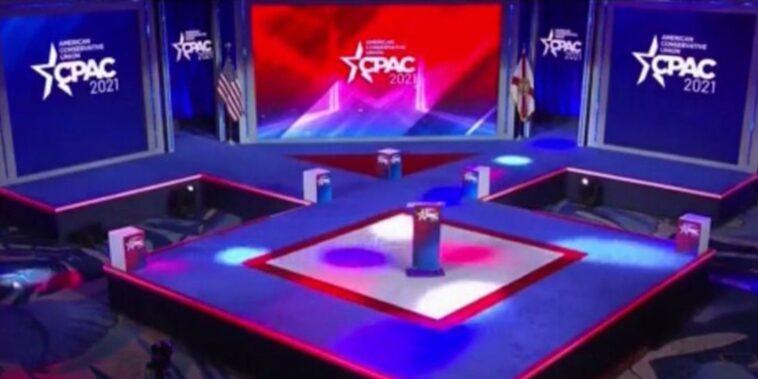 Human beings with any active brain cells knew from the very get-go that the left was full of crap with their Alex Jones-level “Odal rune” conspiracy theory about CPAC.

Radical leftists had launched a coordinated takedown to #CancelHyatt for daring to host the supposed Nazi-loving conservative extremists who held the Conservative Political Action Conference at its hotel in Orlando.

It was complete nonsense, but the left’s commitment to malarkey can be impressive for the uninitiated.

Hyatt Hotels, being the complete cowards that they are, backed away from an initial sensible statement, and then gave the weak-kneed apologia that the Woke scolds craved.

Hyatt condemned CPAC for the “symbol of hate” that had been secretly woven into its stage.

“When we learned that CPAC 2021 stage design had been compared to a symbol of hate, we promptly raised this concern with meeting organizers who strongly denied any connection to such symbols,” it continued. “Had we initially recognized the potential connections to hate symbolism, we would have proactively addressed it prior to commencement of the event.”

The ACU accused Hyatt of having “defamed” the group, the Washington Examiner reported.

“Contrary to Hyatt’s own mission statement of inclusivity, your company just attacked its own customer by caving into the pressures of the politically motivated social media agitators who seek to destroy CPAC, our attendees and speakers from across the country, and the millions of Americans who support our work,” David Safavian, the ACU’s general counsel, wrote to Hyatt Executive Chairman Thomas Pritzker. “Hyatt made a decision to issue additional statements late last night after the conference ended that disparaged and defamed us. These statements appear to validate demonstrably false and malicious claims.”

Now, it turns out that Hyatt was played for complete fools. We now know who really designed the “Odal rune” stage, which was supposedly a throwback to an SS mountain division patch:

JUST IN: 2021 CPAC's "Nazi" stage was designed by Design Foundry, a company that has worked for Biden and MSNBC

98% of company political donations have gone to Democrat candidates pic.twitter.com/Ssaht0nwEY

“2021 CPAC’s ‘Nazi’ stage was designed by Design Foundry, a company that has worked for Biden and MSNBC,” Breaking 911 reported. “98% of company political donations have gone to Democrat candidates.”

The news that Design Foundry had taken responsibility was reported earlier by Forward.com.

The company that was hired to set up the stage at the Conservative Political Action Conference in Orlando, Florida last weekend has taken full responsibility for the design of the stage that resembled a Nazi insignia.

In an exclusive statement to the Forward on Tuesday evening, Design Foundry, a stage design firm based in Hyattsville, Maryland, said it “had no idea that the design resembled any symbol, nor was there any intention to create something that did.”

1. I know Design Foundry because they handle design for many events in DC for companies like MSNBC & Target.

They oversaw the design for the Biden Cancer Summit in 2018.

The owner, Annie, is very liberal and was so excited for Biden’s victory.

There you have it. A sucker who believes the left’s lies is born every minute. Hyatt Hotels’ PR team is just the latest example.

Donald Trump to speak at CPAC in first major address since leaving office, as GOP searches for path forward