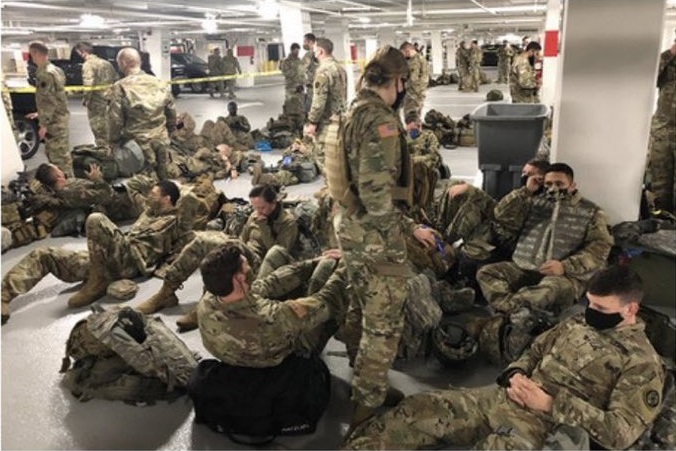 A military source in DC told TPUSA Chief Creative Officer Benny Johnson that for the last week his battalion had been sleeping on the floor in the Senate cafeteria in preparation for Biden’s sham inauguration.

One day after Biden’s inauguration, 5,000 soldiers were moved to a cold parking garage.

There is one power outlet and one bathroom for 5,000 soldiers.

MILITARY SOURCE IN DC:
“For the last week my battalion has been sleeping on the floor in the Senate cafeteria. Today the Senate kicked us out & moved us to a cold parking garage.
5000 soldiers.
1 power outlet.
One bathroom.
This is how Joe Biden’s America treats solders.”

Virtually no one showed up to see senile Joe slur his way through his swearing-in ceremony.

The military felt completely abandoned by the DC elites.

This morning OANN reported that President Trump gave permission for the troops to stay at his lavish Trump Hotel in Washington DC.

SCOOP: Trump has given permission for the troops to stay at Trump Hotel DC if any of them need, per advisor @OANN

Biden and Pelosi called up the troops for selfies, then discarded them like stage props pic.twitter.com/jEVvETBmFT

National Guard Washington DC: Military Occupation of the Capitol to Continue Through Fall 2021