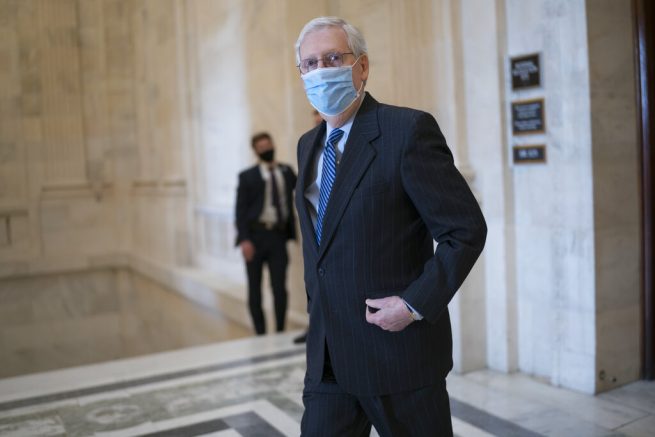 GOP lawmakers who have fallen out of favor with President Trump are feeling the effects as new polling shows Republican voters are shifting their support away from establishment figures. Among those receiving the electoral “cold shoulder” is Senate Minority Leader Mitch McConnell.

The 79-year-old Kentucky lawmaker, long known as the “Grim Reaper” for killing off numerous Democrat initiatives, ranked dead last among fellow Republicans in an Ipsos poll conducted for Reuters.

McConnell, who served as Senate majority leader from 2015 until two months ago, has played a vital role in numerous Republican initiatives. This included the cementing of a conservative majority on the U.S. Supreme Court.

A former ally of President Trump, he most recently found himself at odds with the 45th president after he spoke from the Senate floor claiming President Trump’s comments sparked the January 6 capitol break-in.

“There is no question, none, that President Trump is practically and morally responsible for provoking the events of the day,” he asserted. “No question about it.”

This has led to a number of GOP hopefuls vying for his support as the midterm cycle begins, including Missouri Sen. Josh Hawley as well as South Carolina Gov. Henry McMaster and Florida Sen. Rick Scott. McMaster and Scott have both received his endorsement.

“Henry McMaster has been a great Governor for the wonderful people of South Carolina…Henry has my Complete and Total Endorsement as he runs for re-election!”

Along with McConnell, other former GOP heavyweights have faced presidential backlash and have become targets as they prepare for hotly contested races. For some party outcasts, the weight of President Trump’s backing and the votes of his supporters is too valuable a political asset to lose without a fight.

This is a notion both Georgia Gov. Brian Kemp and the Senate minority leader have both apparently realized. After withstanding months of attacks, both Kemp and McConnell have said they would still back President Trump should he be the nominee in 2024.