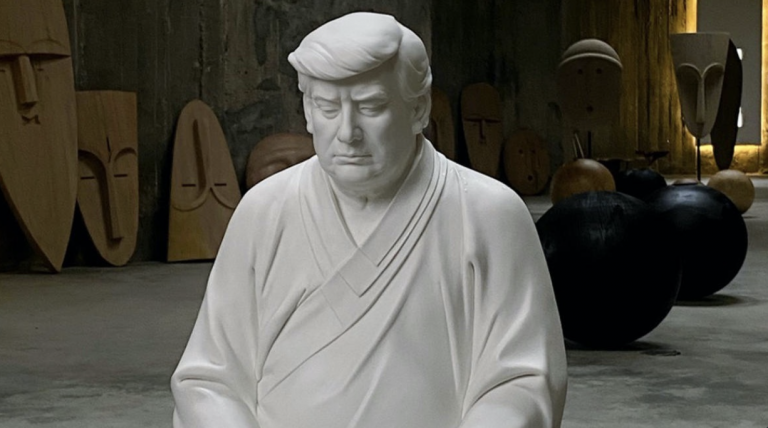 Remember when Democrats claimed that Donald Trump was ruining our reputation overseas?

Remember when they said that the rest of the world was laughing at Trump?

Then why are 14-foot tall “Trump Buddha” statues selling our all over China?

They’re going for over $600 USD, which means they are proportionately much more expensive for Chinese people.

The reality is that President Trump was an extremely successful and popular president for both Americans and non-Americans alike.

#Gravitas | It comes with the slogan “Make Your Company Great Again.” The white-coloured ‘Trump-Buddha’ statue is the rage on Chinese e-commerce platforms. @palkisu tells you more about the crossed-legged Zen Trump. pic.twitter.com/Z5hmCp4hfP

We don’t know about you, but we hope these go on sale in the USA soon!

According to the Daily Caller, the statues were TRENDING in online marketplaces in China:

The statues depict Trump with both hands on his lap in the traditional Buddha pose. The product description dons the slogans “Make your company great again,” and “Trump, who knows Buddhism better than anyone,” the Global Times reported.

The seller of the statues took the “Make America Great Again” slogan and the idea of Trump claiming to know more than everybody else and modified it to appeal to the Chinese market, told the Global Times.

Only one hundred of the statues were made, but the supply is dwindling as dozens have already been sold, Global Times reports.

“I bought it for fun and put it on my desk at home as a decoration,” one anonymous consumer in Shanghai told the Global Times.

“Trump can also be regarded as a representative of an era, and extreme egoism. Now the era has passed but I want the statue to remind me: Don’t be too Trump,” he said.

Let’s be real: do you really think anyone would be inspired enough by Joe Biden to make a statue of him?

And if an artist did make a statue of Joe Biden, who in the world would want to buy it?!

Vendors are selling statues of Donald Trump as Buddha on e-commerce platform Taobao, with the mantra “make your company great again.” Global Times reported that a seller said the idea was inspired by Trump’s campaign slogan and his claims that he knew things better than anyone. pic.twitter.com/4Ug6tlvQkE

Though the statues come in different sizes, the one in highest demand is 14-feet tall!

The Independent has more details on the massive monument to the 45th President:

When one thinks of the teachings of the Buddha – inner peace, acceptance of suffering – the first figure that comes to mind usually isn’t Donald Trump.

And yet, it exists: a porcelain statue of Mr Trump sitting cross-legged like the Enlightened One, available to purchase on the Chinese shopping website Taobao.

“Most people just bought it for fun,” the Trump Buddha’s seller told Global Times, adding that dozens of the statues have already sold.

A product description on Taobao says Trump Buddha “knows Buddhism better than anyone”, and promises that putting him in your office will “make your company great again”.

One buyer, Li Guoqiang, said he hopes the statue will bring good luck to his Beijing construction firm.

“I thought it was a really comical thing to have in the office,” Li told Insider. “I can’t say I’m a Trump fan, but he looks quite peaceful there, doesn’t he?”

Li said he plans to place the statue in his office’s bathroom.

Even though he is out of office, Trump inspires confidence, peace, and stability.

Compare that to Joe Biden, whose first two months in the White House have been marred by controversy and flailing.

We hope to see President Trump return to the spotlight soon!