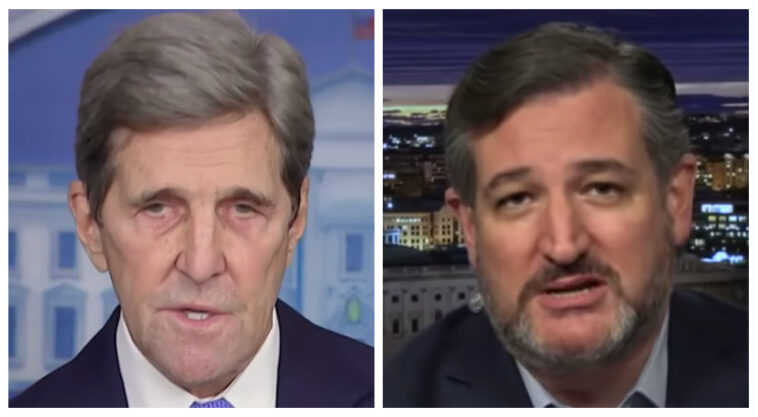 There is no one more out-of-touch, less self-aware, tone-deaf, and arrogant than former senator and secretary of state John Kerry.

This man has spent decades living as a 1 percenter while breezing through the upper echelons of American power he has no inkling of what life is like for the other 99 percent, and that became glaringly obvious again this week.

The Daily Wire has more:

On Wednesday, Kerry appeared in the White House briefing room to talk about President Joe Biden’s expansive climate change policy. During his first days in office, Biden signed executive orders killing an extension of the Keystone XL pipeline, which carries Canadian crude oil into the U.S., and ordering a temporary ban on oil drilling on federal lands. Economists estimate the loss of Keystone will cost 11,000 jobs, and it’s unknowable how many people will be put out of work by the 60-day ban.

But Kerry has an idea for all those displaced workers: Make solar panels.

Because, you know, every oil sector worker is dual-trained in a ‘green job’ as part of their apprenticeship and can just as easily assemble solar panels — or widgets — as safely and securely weld together massive sections of pipeline.

During the presser, Kerry was asked: “Mr. Secretary, if you would, there’s — there certainly are oil and gas industry workers who are watching you both right now who will hear the message that’s — that the takeaway to them is that they are seeing an end to their livelihoods. What do you say to them, particularly those people who President Trump struck a chord with on the campaign trail when he promised to save their jobs? What is your message to them right now?”

“With respect to those workers, no — no two people are more — in this room, are more concerned about it. And the President of the United States has expressed, in every comment he has made about climate, the need to grow the new jobs that pay better, that are cleaner, that —” Kerry said, breaking off on a tangent about black lung disease for coal miners.

“I mean, you know, you look at the consequences of black lung for a miner, for instance, and measure that against the fastest-growing job in the United States before COVID was solar power technician. The same people can do those jobs, but the choice of doing the solar power one now is a better choice. And similarly, you have the second-fastest-growing job pre-COVID was wind turbine technician,” he said.

“So what President Biden wants to do is make sure those folks have better choices, that they have alternatives, that they can be the people who go to work to make the solar panels — that we’re making them here at home. That is going to be a particular focus of the Build Back Better agenda.”

Kerry added that fossil fuel workers “have been fed the notion that somehow dealing with climate is coming at their expense. No, it’s not. What is happening to them is happening because of other market forces are already taking place.”

Got that? Losing your job because a president may have illegally canceled it is due to “market forces.”

In any event, Sen. Ted Cruz (R-Texas) wasn’t about to let that hubris slip by unchallenged.

“What an arrogant, out-of-touch statement for a centimillionaire to say,” fired back in an interview with Fox News. “You know, ‘You little people, you know, I don’t like the choices you’re making, and so your jobs go away,’ as John Kerry said right there. Quelle surprise that the Democratic elites have decided that blue-collar workers, that union members, that men and women with calluses on their hands, they’ve made the wrong choices, in John Kerry’s words.”

For the record, the Kerrys are worth between $165 million and $3.2 billion, The Daily Wire noted.

So it’s not likely he’ll be wiped out any time soon by “market forces” or the stroke of a president’s pen.