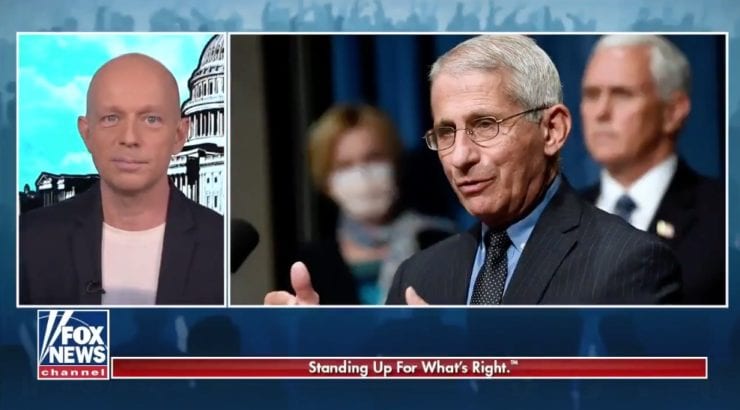 Fox News’ The Revolution host Steve Hilton unloaded on Dr. Anthony Fauci, telling his viewers that after the facts he is sharing with the public that reveal the origins of COVID-19, Dr. Fauci was “going to need friends in high places.”

Hilton explained how the influenza virus was injected from one ferret to another. According to Hilton’s study, ferrets have respiratory systems that are very similar to humans. About 10 years ago, scientists in Erasmus Medical Center in the Netherlands manipulated the virus in ferrets until the virus was mutated enough to be transmitted through the air. The “Gain of Function” virus research was born. The idea was to engineer the most contagious, deadly viruses in a lab to help us better prepare to fight them.

According to Hilton, Gain of Function virus research has been funded by none other than the National Institute of Allergies and Infectious Disease’s Dr. Anthony Fauci. The Wuhan Institute of Virology is one of the leading laboratories studying the COVID virus.

“Imagine if a deadly virus engineered in a lab to be incredibly contagious somehow escaped from a lab; it could wreak havoc—precisely because it was designed to do this—not by nature, but by us!” Hilton said.

“Gain of Functions research has always been highly controversial,” Hilton explained. The Revolutionary host explained that in 2014, the Obama administration placed a complete moratorium on this kind of research, “following recent biosafety incidents at federal research facilities.

“Despite the controversy studying this type of research, it always had one steadfast champion, a leading figure in the world of infectious diseases—Anthony Fauci,” Hilton explained. “His institute funded that first ferret study,” he explained, adding, “At the time, he co-wrote an op-ed in the Washington Post describing this research as ‘A flu risk worth taking…important information and insights can come from generating a potentially dangerous virus in a laboratory.’”

Despite the Obama administration’s ban on “Gain of Functions” research, Hilton explains that Dr. Anthony Fauci gave over $3 million over the course of six years to zoologist Peter Daszak (known as the “bat man”) of Eco Health Alliance. Daszak first discovered the bat origin of the SARS pandemic over a decade ago. According to Hilton, Peter Daszak himself subcontracted the “Gain of Function” portion of Fauci’s project to the Wuhan Institute of Virology.” Hilton asks, “The question is—did they give it to us?”

Hilton continued with his bombshell report.

“Let’s see what they did with the Fauci money,” Hilton says.

“Inside the projects result page, there are 13 papers co-authored by the head of the Wuhan’s Infectious Disease unit. One of the papers, published in 2017, and Zoologist Peter Daszak is listed as a co-author. Inside the funding section of that paper is the ID of the Fauci commissioned project,” adding, “That’s the money trail!”

“Until now, the only reporting on Fauci’s role on all this has been on the funding of the Wuhan lab in general,” Hilton continued, “Tonight, we can go further—thanks to this paper, we can see the specific activity that Fauci funded—and it’s terrifying!”

They collected samples of bat feces in a bat cave in China, Hilton explained, adding that they found novel coronaviruses in the bat feces, and then they infected human cells with them. Here’s the most important part, Hilton explained, “The genetic changes they made in the lab unlocked a highly specific doorway into the human body—the virus that causes COVID-19 uses that same exact same doorway!”

“Are we still funding this research? “ Hilton asked, as he explained that they reached out to Dr. Fauci, the NIA and Peter Daszak and got no replies from any of them.