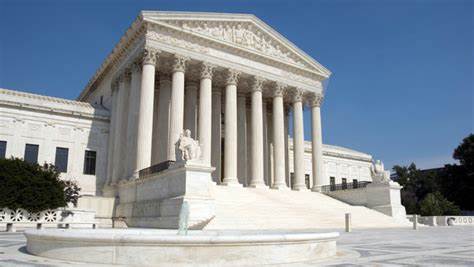 The four states are Georgia, Michigan, Pennsylvania, and Wisconsin.

This case is going to go directly to the Supreme Court.

In a novel legal strike, the state of Texas has asked the Supreme Court to invalidate the election results in Michigan, Wisconsin, Pennsylvania and Georgia, arguing officials in those four battleground states violated the Constitution by making changes to how ballots were cast and counted without legislative approval.

The lawsuit filed late Monday night by Texas Attorney General Ken Paxton asked the justices to issue a temporary restraining order preventing the states “from taking action to certify presidential electors or to have such electors take any official action including without limitation participating in the electoral college.”

The suit argues that changes made by the state’s governors, secretaries of states and election supervisors were “inconsistent with relevant state laws and were made by non-legislative entities, without any consent by the state legislatures. The acts of these officials thus directly violated the Constitution.”

The state of Texas has sued Georgia, Michigan, Pennsylvania & Wisconsin over election irregularities!

“The 2020 election suffered from significant and unconstitutional irregularities…”

The lawsuit argues the States violated the Electors’ Clause.

Here is a little bit from the Lawsuit:

As set forth in the accompanying brief andcomplaint, the 2020 election suffered from significantand unconstitutional irregularities in the DefendantStates:

• Intrastate differences in the treatment of voters,with more favorable allotted to voters – whetherlawful or unlawful – in areas administered bylocal government under Democrat control andwith populations with higher ratios of Democratvoters than other areas of Defendant States.

• The appearance of voting irregularities in theDefendant States that would be consistent withthe unconstitutional relaxation of ballot-integrity protections in those States’ election laws.

This could be the game-changer we were waiting for.