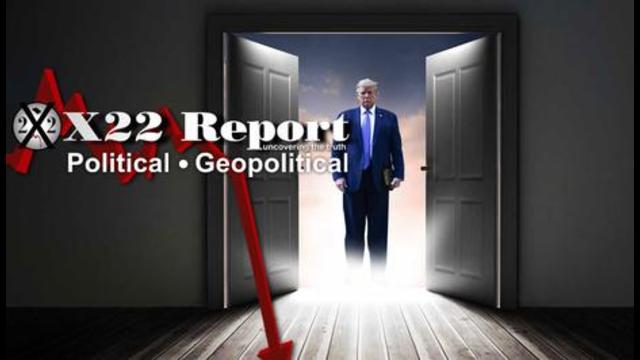 Deep State – Thank you for playing

Donald Trump was right, the economy is now opening up and we are seeing an almost perfect V recovery. Trump and the patriots are allowing the people to see the plan of the [CB] and Deep State. The [CB] just revealed their plan and digital currency controlled by China. The Deep State/MSM are doing exactly what the patriots want. They are now reversing everything Trump has done and while they are doing this they are red-pilling millions of Americans. The Deep State/Corrupt Politicians just opened the front door. Think Space Force and the impeachment trial. In their impeachment document they have brought in election fraud, Trump has the ability to counter the statement they made. Episode 2396b

From their website: X22 Report is a daily show that will cover issues surrounding the economic collapse. All our reports and Daily Alerts are backed up by source links. I work very hard to bring you the facts and I research everything before presenting the report. The X22 Report is “one man’s opinion”. Anything that is said on the show is for information purposes only.  If making any type of investment or legal decision it would be wise to contact or consult a professional before making that decision.

This X22 Report and The People has been put together to benefit “The People”. When I say “The People” I am talking about everyone in the world. We as a people want freedom, we want to make a living to support our family. The founding fathers of America wanted this and We The People today want it. Join me and many others to fight what is rightfully ours.

The deep state is a conspiracy theory which suggests that collusion and cronyism exist within the U.S. political system and constitute a hidden government within the legitimately elected government. Author Mike Lofgren believes that there is “a hybrid association of elements of government and parts of top-level finance and industry that is effectively able to govern the United States without reference to the consent of the governed as expressed through the formal political process”, or consider the deep state to encompass corruption prevalent among career politicians and civil servants.

The term was originally coined to refer to a relatively invisible state apparatus in Turkey “composed of high-level elements within the intelligence services, military, security, judiciary, and organized crime” and similar alleged networks in other countries including Egypt, Ukraine, Spain, Colombia, Italy, Israel, and many others.
more -> https://en.wikipedia.org/wiki/Deep_state_in_the_United_States