Trump Taunts Media at Epic Rally: “You Might Not Be So Happy in a Few Weeks” 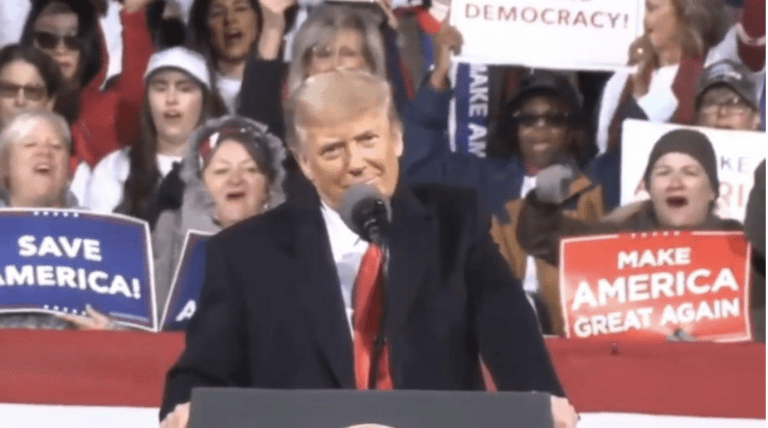 Make no mistake about it, folks.

President Trump is fighting until he is able to claim his rightful victory in the 2020 presidential election!

During his EPIC rally in Valdosta, GA tonight, Trump looked straight into the camera, pointed at the media, and declared:

You might not be so happy in a few weeks.

President Trump is showing no signs of backing down.

He’s not slowing down.

He is fighting for you and for me — to make sure that our votes count!

That only legal votes count!

.@realDonaldTrump to Fake News “You might not be so happy in a few weeks.” #TrumpRally

Want to know how big the crowd was?

Want to know whether or not the base is still standing up for President Trump?

Take a look at this moment when the crowd began chanting: “FIGHT FOR TRUMP!”

One Of The Most Powerful Moments In @realDonaldTrump Rally History

Of course, the media has been SPINNING this rally every way they can.

This is why Trump boldly declared:

You might not be so happy in a few weeks.

We can’t wait to see the liberal tears again!

Here’s a taste of how the New York Times chose to cover the rally:

One month before a pair of Georgia runoffs that will determine the Senate majority, President Trump used a rally for the Republican senators on Saturday to complain about his own loss last month, insisting he would still prevail and, with notably less ardor, encouraging voters here to re-elect the two lawmakers.

Taking the stage for his first rally as a lame duck president, Mr. Trump immediately, and falsely, claimed victory in the presidential race. “You know we won Georgia, just so you understand,” he said.

Mr. Trump lost this state by just under 12,000 votes to President-elect Joseph R. Biden Jr., who won the White House with 306 electoral votes. But the president has persisted in his baseless claims that the final outcome remains in doubt.

“They cheated and rigged our presidential election, but we’ll still win,” Mr. Trump said, offering no evidence but nonetheless prompting about 10,000 supporters gathered on the tarmac at a regional airport to chant, “Stop the Steal!”

Speaking for an hour and 40 minutes, the president did read a series of scripted lines about the two Republican senators, David Perdue and Kelly Loeffler, and repeatedly urged his supporters in Georgia to vote next month, even mentioning the deadlines for the mail-in ballots he has so often scorned.

Yet he embedded those dutiful remarks of support in a deep thicket of conspiracy-mongering about his defeat and even aired a lengthy montage of video of clips from the conservative news outlets Newsmax and One America News Network, which also depicted a sinister plot of electoral theft.

Before he arrived in Valdosta, the president made no attempt to disguise his central priority as it relates to Georgia: overturning his loss in the state. He began the day with a telephone call with Gov. Brian Kemp, ostensibly to offer his condolences to the governor about the death in a car accident of a young man who was close to Mr. Kemp’s family.

We don’t know about you, but the writer of this article sounds pretty arrogant!

But… after seeing the fired up crowd tonight… it’s no wonder that the media is working OVERTIME to slam President Trump!

It’s impossible to deny the enthusiasm:

3 thoughts on “Trump Taunts Media at Epic Rally: “You Might Not Be So Happy in a Few Weeks””