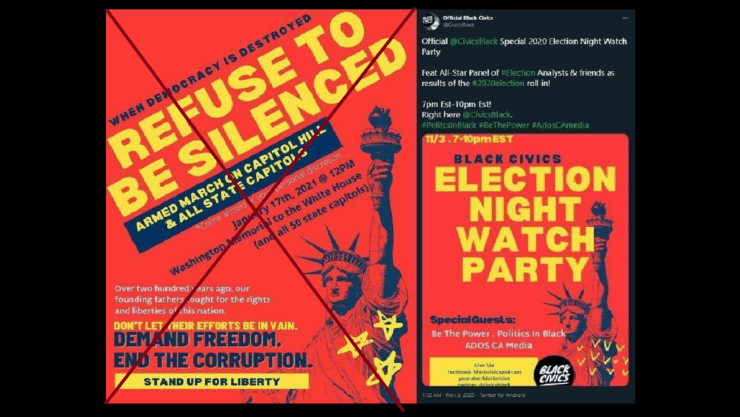 LEFT: A Poster for A March On Washington DC on January 17th.  RIGHT A Nearly Identical Poster Designed by a BLM Group For The November 3rd Election. Both Events Appear To Be Designed By The Same People Using the Same Marxist Propaganda Style Depicting Lady Liberty.  This Is Likely To Trick Pro-Trump Supporters Into Attending While Normalizing American Imagery With Communist Propaganda.

Across the country, protests are being discussed in capitol cities, including Washington DC.  However, information suggests that these protests are not really being planned sincerely.  It is believed that many of these protests are being designed as ‘false flag’ events run by anti-Trump anti-conservative and antigovernmental organizers.  The events may be designed to be infiltrated by far-left or anarchist groups to get out of hand, much like the events of January 6th 2021 at the US Capitol.  Once they get out of hand, images of unrest from the events will be erroneously tied to constitutionalism and Trump support in order to permanently destroy the America First movement.

In the title image of this article, the image on the left is a poster for an event  being organized for tomorrow, January 17th 2021 in Washington DC.  It claims to be a ‘Stand up For Liberty’ event that Trump supporters might attend.  Beside it, on the right of the image, an event that was held on November 3rd for a pro-BLM rally seems to have been designed by the same author(s).  We can tell this because it used the same color scheme, imagery, and font, all of which are clearly reminiscent of Marxist-Era propaganda art.

Why would a pro-America pro-Liberty pro-Trump event design itself to look like classic Marxist propaganda?

This suggests that Trump Supporters and other Constitutionally minded individuals are likely being duped by such posters into attending events at which they will be used as pawns to further the ends of their ideological opponents, like BLM, Booglaoo Bois, or Antifa.  This would be similar to what happened at the Capitol on January 6th, 2020, when a peaceful Trump rally was infiltrated by BLM, Antifa, Antifa again, and likely  the Boogloo Bois.  Once embedded within the massive crowd, they then agitated and instigated the chaos.  This chaos is then blamed by establishment politicans and media on Trump supporters in order to destroy their movement.

While all of these anti-American and anti-Trump movements differ in many of their end goals, they do share one common goal: taking down America in one form or another.  They will work together until they achieve that goal.

Please, be aware of this and plan accordingly to not attend these events out of an abundance of caution.  We do not want to give conservatism and America First a bad name.